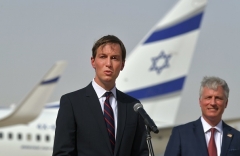 (CNSNews.com) – As President Trump’s administration winds towards a close, critics took to MSNBC airwaves on Monday to tear into White House senior advisor Jared Kushner for traveling to the Middle East, characterizing the president’s 39-year-old son-in-law as an abject failure and a “ridiculous” figure, and expressing relief that “serious, competent, intelligent people” will be returning to the executive branch soon.

In the space of less than three months Kushner, tasked to tackle a problem that has vexed U.S. administrations for more than half a century, helped to deliver three Israeli-Arab normalization agreements, with the UAE, Bahrain, and Sudan.

He attributed the achievements to the administration’s rejection of “the failed conventional thinking of the past” – the dogma stating that the resolution of the Palestinian problem is the prerequisite for any progress in Middle East peacemaking.

Responding to the news that Kushner is now traveling to Saudi Arabia and Qatar – reportedly in a bid to help broker an end to a three-year rift between two often troubling U.S. allies in the region – MSNBC host Joy Reid did not mask her irritation.

Noting that Kushner was “flitting off to meet with the Saudis and with Qatar,” Reid said, “That never sounds like a good idea, because nothing he does ever succeeds. But also, what is he doing, trying to engage in – what – foreign policy at the last minute? It just – it doesn’t, it doesn’t smell right.”

The next administration begins on January 20, in 51 days.

Reid turned to guest Stuart Stevens, a GOP operative who is a senior advisor to the anti-Trump Lincoln Project. He described Kushner as “one of the more ridiculous figures in public American history.”

“The idea that you would have someone involved in foreign policy based upon who the president’s daughter is sleeping with is the most absurd notion,” said Stevens.

“A guy who said that he understood the Mideast because he read 26 books. I mean there’s college seniors that have read a lot more books on this and don’t think of themselves experts. It’s just a degrading of the process which makes America look weak. If the problem can be solved by Jared Kushner, it’s not taken seriously as a problem.”

“And I think we have to go back to assert American leadership here,” Stevens concluded. “You don’t lead the world with ridiculous figures like Jared Kushner, and hopefully those days are over.”

“I will say that the people that we’ve seen put forward by the Biden team so far are serious people,” she said. “And as Ben [Rhodes, her other guest] said, you can disagree or agree with them, these are serious, competent, intelligent people. I think the world will breathe a great bit of fresh air and they’ll be very, very happy to see sort of normal government in America again.”

Kushner was widely mocked after telling Sky News Arabia early this year that preparations for his Mideast mission had included reading “25 books” on the subject. He also said, “I’ve spoken to every leader in the region, I’ve spoken to everyone who’s been involved in this.”

Despite Stevens’ disdainful assessment of Kushner and Reid’s contention that “nothing he does ever succeeds,” the accords he helped to broker in the Middle East have been recognized by others, including individuals frequently critical of Trump, like New York Times columnist Thomas Friedman, who called the first deal announced – between Israel and the UAE – “huge” and “a geopolitical earthquake.”

Before the UAE, Bahrain, and Sudan agreed to normalize ties with Israel in the summer and fall of 2020, only two other Arab nations had taken similar steps since the establishment of the modern state of Israel in 1948 – Egypt in 1979 and Jordan in 1994.

Iran’s supreme leader Ayatollah Ali Khamenei, decrying the recent breakthroughs, saw them as the work of “filthy Zionist agents of the U.S. – such as the Jewish member of Trump’s family,” a reference to Kushner.

Like a string of predecessors, the Obama administration sought to advance Israeli-Palestinian peace efforts, with then-Secretary of State John Kerry mounting a nine-month push to kick start talks, an initiative that eventually collapsed in April 2014.

Shortly before he left the State Department, Kerry stated emphatically that “there will be no separate peace between Israel and the Arab world.”

“I’ve heard several prominent politicians in Israel sometimes saying, ‘Well, the Arab world is in a different place now, we just have to reach out to them and we can work some things with the Arab world and [then] we’ll deal with the Palestinians,’” he told an audience at the Brookings Institution’s Saban Forum in late 2016. “No, no, no, and no.”

“There will be no advance and separate peace with the Arab world without the Palestinian process and Palestinian peace,” Kerry declared. “Everybody needs to understand that.”