In Translation of Leaked Tape, Zarif Says He Didn’t Know About Israeli Ops in Syria Until Kerry Told Him 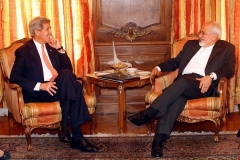 (CNSNews.com) – Iran’s foreign minister says he did not know about covert Israeli attacks on Iranian targets in Syria before former Secretary of State John Kerry informed him about them – an additional twist to a simmering controversy that is drawing fresh calls by Republican lawmakers for the resignation of President Biden’s climate envoy.

As reported earlier, in a leaked recording of a lengthy interview not intended for general release, Foreign Minister Javad Zarif said Kerry had told him that Israel had carried out more than 200 attacks on Iranian forces in Syria. Stunned at the prospect that a former secretary of state may have shared with an enemy regime information about the clandestine actions of a close U.S. ally, critics in Congress called for Kerry’s removal.

But Kerry dismissed the claim as “unequivocally false,” and the State Department defended him by saying the issue of Israeli operation in Syria was public knowledge at the time, thus implying Kerry was not telling Zarif anything he would not already have known.

However, if Zarif is to be believed, he did not know about the attacks before Kerry enlightened him.

A translation of the relevant portion of the interview, from the outlet that first broke the story – Iran International, a Saudi-funded, London-based news service – has Zarif complaining about the fact that his foreign ministry was often not informed about the regime’s military operations in Syria, which were overseen by Qods Force commander Qassem Soleimani.

By way of example, Zarif said, “Kerry informed me that Israel attacked you [Iran] 200 times in Syria!”

“You didn’t know?” the interviewer asked.

On Monday, State Department spokesman Ned Price said, in relation to information about Israeli military strikes on Iranian targets in Syria, “if you go back and look at press reporting from the time, this certainly was not secret, and governments that were involved were speaking to this, publicly, on the record.”

A day later, Secretary of State Antony Blinken was asked by CNN’s Jake Tapper whether he had spoken to Kerry about the claim that he shared information with Zarif about Israeli attacks on Iranian interests in Syria.

“Jake, these things were so secret that they were all reported in the press at the time,” Blinken replied. “So it is utter nonsense, and it’s really unfortunate that people continue to try and play politics with this.”

The first time Israel publicly acknowledged that it had carried out secretive operations against Iranian interests in Syria – with the number 200 mentioned – was in September 2018.

As reported earlier, it’s unclear exactly when the Kerry-Zarif conversation took place – if indeed it did – and, if it did, whether it was during a face-to-face meeting or in some other form of communication.

Kerry has acknowledged having met with Zarif several times between the time he left the State Department (January 2017) and the time President Trump withdrew from the Iran nuclear deal (May 2018). Their last known meeting, in New York in April 2018, took place five months before Israel’s public admission.

On Thursday, 19 Republican senators in a letter to Biden urged him to investigate the claims against Kerry.

“Secretary Kerry has a long history of employing transactional diplomacy against the best interests of the United States or our allies – often trading long-term national security for a flawed short-term political agenda – which has ultimately endangered our allies and emboldened our adversaries,” they wrote. “Given the gravity of these allegations, in addition to investigating these claims, we call on you to suspend Secretary Kerry’s access to sensitive information until this investigation is faithfully resolved.”

Kerry and Zarif led their respective teams of negotiators during the marathon talks that produced the Iran nuclear deal in 2015. The Biden administration is seeking to return to the accord three years after Trump exited, and talks currently underway in Vienna have that goal.

Meanwhile the fallout over what’s being called “Zarifgate” continues in Iran, where the kerfuffle is not about the Kerry claim but about comments Zarif made in the recording seen as insufficiently respectful of Soleimani.

The Qods Force commander, killed in a U.S. drone strike in Baghdad ordered by Trump early last year, is highly venerated by the regime and its supporters, and Zarif’s criticism of him has caused a national scandal.

The Zarif interview, intended as part of a government oral history project, was arranged by the Center for Strategic Studies, an Iranian thinktank attached to the office of Iranian President Hassan Rouhani.

On Thursday the head of the center, Hesamoddin Ashena, either resigned (according to the state news agency IRNA) or was fired by Rouhani (according to Iran’s Tasnim news agency) over the controversy.

Theories swirling in Iranian media outlets include speculation that the recording was leaked by Zarif’s opponents to undercut any possibility he could run for president when Rouhani’s second term ends this summer. For his part, Rouhani says Iran’s enemies leaked it to undermine the talks in Vienna.