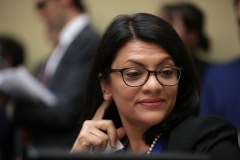 (CNSNews.com) – Rep. Rashida Tlaib (D-Mich.) was slammed by colleagues on both sides of the aisle after using the word “apartheid” to describe Israel during Thursday’s debate on funding the Iron Dome missile defense system.

The heated exchanges came before the House passed a standalone measure to provide $1 billion for the Iron Dome, a system jointly-developed by Israel and the U.S. that was credited with preventing the vast majority of the thousands of rockets fired towards Israeli population centers by Hamas terrorists in Gaza last May from reaching their targets.

Divisions within a party caucus that has long boasted strong pro-Israel credentials have flared periodically since the 2018 midterm elections brought the progressives known as the Squad into the House, arising largely from their opposition to military aid for Israel and their support for the anti-Israel Boycott Divestment, and Sanctions (BDS) movement.

Supporters of the Iron Dome point out that it is a purely defensive system designed to intercept and destroy incoming short-range projectiles. But Tlaib, a Palestinian Americans and one of the first two Muslim women elected to Congress, charged Thursday that it enables “war crimes” and said the U.S. should not be sending “weapons” to any country “without human rights law compliance.”

“I will not support an efforts to enable and support war crimes, human rights abuses, and violence,” she said. “We cannot be talking only about Israelis’ need for safety at a time when Palestinians are living under a violent apartheid system.”

Tlaib also accused “apartheid Israel” of being responsible for the May violence, saying it had “manufactured” the crisis by attacking “worshippers at one of the most – holiest Islamic locations, the al-Aqsa mosque.”

Rep. Chuck Fleischmann (R-Tenn.) said in response that while Democrats had spoken during the debate in support of Israel, “we heard right now from my colleague across the aisle with a shocking statement.”

“She opposes this, because they have a vocal minority in the majority party that is anti-Israel, that is antisemitic, and as Americans we can never stand for that,” he said, urging “the majority to condemn the comments that were just made by their member.”

Rep. Ted Deutch (D-Fla.) then did just that, discarding his prepared remarks to respond to Tlaib’s comments.

“I cannot allow one of my colleagues to stand on the floor of the House of Representatives and label the Jewish, democratic state of Israel an apartheid state. I reject it,” he said.

“If you believe in human rights, if you believe in saving lives – Israeli lives and Palestinian lives – I say to my colleague who just besmirched our ally, then you will support this legislation.”

“And when there is no place on the map for one Jewish state, that’s antisemitism.” 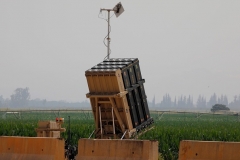 Thursday’s vote came two days after Democrats removed the funding from the stopgap bill designed to prevent a government shutdown.

That step was attributed to objections from progressives, although Democratic leaders countered that the Iron Dome funding should not have been inserted into the continuing resolution in the first place.

Majority Leader Steny Hoyer (D-Md.) then undertook to bring standalone legislation before the end of the week to fully fund the Iron Dome system.

Reacting to Thursday’s vote, Israeli Prime Minister Naftali Bennett thanked “members of the U.S. House of Representatives, Democrats and Republicans alike, for the overwhelming support for Israel and for the commitment to its security.”

“Whoever tries to challenge this support received an unequivocal answer today,” he said. “The people of Israel thank the American people and its representatives for their steadfast friendship.”

Tlaib’s reference to the al-Aqsa mosque is in keeping with the unsubstantiated but widely-echoed Palestinian narrative that Israeli troops last May desecrated Islam’s third-holiest site in Jerusalem’s Old City.

Palestinians threw rocks and projectiles – sometimes from within the revered mosque

itself – at Israeli security forces, who used rubber bullets and stun grenades to disperse them.