The ‘Pillar of Shame’ statue, memorializing the victims of the 1989 Tiananmen Square massacre, has stood on the campus at the Hong Kong University for 23 years. (Photo by Mike Clarke/AFP via Getty Images)

(CNSNews.com) – Days after the most troubling election in Hong Kong since its handover to China, the University of Hong Kong in an unannounced overnight operation removed a sculpture which for two decades has marked the Chinese Communist Party’s crushing of pro-democracy protests in Tiananmen Square in 1989.

Hong Kong residents posted images on social media showing workers curtaining off the 26-foot-high “Pillar of Shame” before its post-midnight removal, apparently in a cargo container. Security guards tried to prevent people from using their phones to film the work.

Created by Danish sculptor Jens Galschiøt, the statue depicts a pile of broken bodies and anguished faces, symbolizing the victims. On the plinth are inscribed the words, “Tiananmen Massacre  June, 4th 1989” and, “The old cannot kill the young forever.”

Loaned to the Hong Kong Alliance in Support of Patriotic Democratic Movements of China, a group that organized annual June 4 anniversary vigils, the sculpture stood at the HKU campus for 23 years.

But several months ago campus authorities said they wanted it removed, citing subversion prosecutions against leaders of the now-disbanded Hong Kong Alliance.

Galschiøt said on Thursday the removal of his artwork was “a disgrace and an abuse and shows that Hong Kong has become a brutal place without laws and regulations such as protecting the population, the arts and private property.”

“And it’s even more grotesque that they use the Western holiday, Christmas, to carry out the destruction of the artwork,” he said.

Galschiøt said he has been trying for the past three months to work out an arrangement with Hong Kong authorities, to enable him to remove the work, which he still owns, and ship it to Denmark – but without success.

With letters from himself and his lawyers going unanswered, he said he had offered to travel to Hong Kong himself to oversee the removal, but requested assurances of cooperation from the university as well as immunity from prosecution, given that the controversial national security law provides “a legal basis for arresting foreign nationals who engage in activities that criticize China.”

In response to queries, HKU said its Council made a decision at a meeting on Wednesday to remove the statue, “based on external legal advice and risk assessment for the best interest of the university.”

Describing the sculpture as “aged” and “fragile” and expressing concern about “potential safety issues,” it said no-one had ever obtained HKU permission to display it, “and the university has the right to take appropriate actions to handle it at any time.”

With regard to legal concerns, the HKU Council cited not the recent CCP-imposed security legislation but rather the criminal code enacted when Hong Kong was under British rule.

“Latest legal advice given to the university cautioned that the continued display of the statue would pose legal risks to the university based on the Crimes Ordinance enacted under the Hong Kong colonial government.”

As for the statue’s future, it said the artwork would be put into storage, and that the university would “seek legal advice on any appropriate follow up action.”

The overnight removal of the “Pillar of Shame” comes amid the CCP’s ongoing stifling of democracy in a territory that was promised 50 years of limited freedoms and capitalism under a “one country, two systems” agreement with former colonial ruler Britain.

Less than halfway into that 50-year period, Beijing in 2019 lost patience with pro-democracy activism and large anti-government protests, and in 2020 imposed a new national security law that criminalizes actions which it views as subversion, secession, or collusion with foreign forces.

Furthering a CCP campaign to purportedly preserve stability and order, legislative changes were then made to ensure that only those deemed to be “patriots” may administer Hong Kong, including strict vetting of prospective candidates.

Many pro-democracy legislators and activists were arrested for alleged offenses under the national security law or went into exile. In Sunday’s Legislative Council election, 89 of the 90 seats went to pro-Beijing candidates (and the 90th to a “centrist.”)

Some exiled democracy activists called for a boycott and the turnout was 30.2 percent, the lowest recorded since the 1997 handover.

The U.S. joined Britain, Canada, Australia and New Zealand in a joint statement of “grave concern over the erosion of democratic elements” in Hong Kong’s electoral system – criticism dismissed by a Chinese foreign ministry spokesman as part of a “vile scheme to destabilize Hong Kong and contain China’s development.” 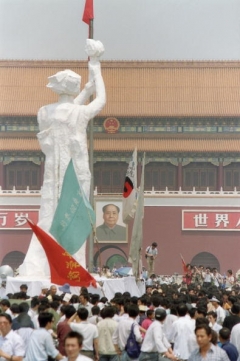 Commemoration of the Tiananmen Square massacre is strictly forbidden in mainland China and until recently, Hong Kong was the only place in the country where the June 4 anniversary had been marked openly each year.

Hong Kong police banned the annual vigil in 2020 and again this year, blaming the coronavirus pandemic. Anyone taking part in “unauthorized assemblies” faced the risk of up to five years’ imprisonment.

Last June, officials closed the Hong Kong Alliance’s June 4 Museum. In September police arrested four of its leaders under the national security law and the group, which had been formed in the wake of the 1989 massacre, then disbanded.

Untold numbers of protestors – estimates range from hundreds to several thousand – were killed when the Chinese military in the summer of 1989 was sent in to crush the student-led demonstrations in the central Beijing square, home to the Great Hall of the People and Mao Zedong’s mausoleum.