A U.S. military Predator drone at the Bagram air base in Afghanistan. (Photo by Bonny Schoonakker/AFP via Getty Images)

(CNSNews.com) – The Biden administration and Pentagon have said the U.S. will rely on “over-the-horizon” capabilities to keep terrorists in check in Afghanistan following the troop withdrawal, but on Tuesday the Taliban demanded that the U.S. stop flying drones in Afghan airspace.

Failure to do so would invite “negative consequences,” the fundamentalist group said in a statement issued by its spokesman, Zabihullah Mujahid.

“Countries are the sole owners of territorial and air sovereignty by their states under international law,” Mujahid said. “Therefore, the Islamic Emirate, as the sole legal entity of Afghanistan, is the custodian of Afghanistan’s land and airspace.”

The operation of U.S. unmanned aerial vehicles in “Afghanistan’s sacred airspace” was a violation of international law and of the U.S. commitments to the Taliban, made in Doha, he said.

Notwithstanding Mujahid’s description of the Taliban as “the sole legal entity of Afghanistan,” the terrorist group that seized power by force last month and announced a cabinet that includes U.N.-sanctioned terrorists has not been formally recognized by any other country.

“Afghanistan is an independent sovereign state,” said spokeswoman Hua Chunying in reponse to a question about the group’s statement on airspace. “The U.S. should earnestly respect Afghanistan’s sovereignty, independence and territorial integrity.”

Queries sent to the Pentagon and U.S. Central Command brought no response by press time.

“Without speaking to specific rules of engagement surrounding airstrikes, there is currently no requirement to clear airspace with the Taliban,” he said. “And we do not expect that any future over-the-horizon counterterrorism strikes would hinge on such a clearance.”

Asked about concerns that the Taliban could try to shoot down U.S. drones, Kirby replied, “I would just in general say that in the conduct of any operation, we factor in all manner of force protection into the actual execution of it. And that would be no different here in Afghanistan.” 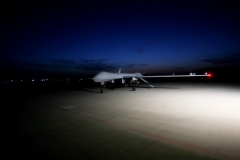 But their far more common role in theaters where terrorists operate is an intelligence, surveillance, and reconnaissance (ISR) one – a task that becomes even more significant in the absence of troops on the ground, as is now the case in Afghanistan.

In testimony before the Senate Armed Services Committee on Tuesday, Defense Secretary Gen. Lloyd Austin said “over-the-horizon” operations refer to “assets and target analysis that come from outside the country in which the operation occurs.”

“These are effective, and fairly common, operations,” he said, noting that a senior al-Qaeda terrorist in Syria had been targeted in one such strike several days ago.

“Over-the-horizon operations are difficult but absolutely possible,” he said. “And the intelligence that supports them comes from a variety of sources, not just U.S. boots on the ground.”

After ISIS-K terrorists attacked the U.S.-led evacuation mission at Kabul last month, killing 13 U.S. service personnel and more than 160 Afghan civilians, the U.S. military carried out two over-the-horizon drone strikes – in Nangarhar province on August 27, and in Kabul on August 29.

Both were intended to target ISIS-K terrorists although the Kabul strike instead killed ten civilians, and is the subject of several official inquiries.

Both strikes were carried out at the orders of a “strike cell commander” based in a country outside of Afghanistan.

As part of a new military arrangement announced by the Pentagon in early July, an entity called the “Defense Security Management Office Afghanistan” was established in Qatar, tasked among other things to provide support for over-the-horizon aircraft maintenance.

U.S. military drones have been shot down by hostile forces before in recent years, including by Iran-backed Houthis in Yemen in Oct. 2017, June 2019, and August 2019, and by Russian mercenary-backed militants in Libya in November 2019.

Iran in June 2019 used a surface-to-air missile to shoot down a U.S. Navy surveillance drone which the regime claimed had entered its airspace. The Pentagon disputed that, saying the drone was downed while “over the Strait of Hormuz and fell into international waters.”