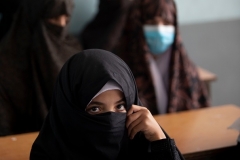 A young girl covers up in Taliban-ruled Afghanistan. (Photo by Majid Saeedi/Getty Images)

(CNSNews.com) – The last time the Taliban ruled most of Afghanistan, rates of child marriages were among the world’s highest, and amid a deepening economic crisis, the United Nations’ children’s agency is concerned that the numbers are likely to rise once again.

“We have received credible reports of families offering daughters as young as 20 days old up for future marriage in return for a dowry,” UNICEF executive director Henrietta Fore said at the weekend.

“The extremely dire economic situation in Afghanistan is pushing more families deeper into poverty and forcing them to make desperate choices, such as putting children to work and marrying girls off at a young age,” she said.

The U.N. has warned that Afghanistan is on the brink of the world’s most serious humanitarian crisis, with 23 million of its 38 million people unlikely to have sufficient food through the coming winter without assistance.

Fore added that the Taliban regime’s prohibition on most teenage girls returning to school is contributing to the risk.

“Education is often the best protection against negative coping mechanisms such as child marriage and child labor.”

UNICEF called on the “de facto authorities” – the terrorist group that seized power by force last August – to prioritize the reopening of secondary schools for girls, warning that “the future of an entire generation is at stake.”

The agency said the consequences of girls marrying too young are many.

“Child marriage can lead to a lifetime of suffering. Girls who marry before they turn 18 are less likely to remain in school and more likely to experience domestic violence, discrimination, abuse and poor mental health,” it said. “They are also more vulnerable to complications in pregnancy and childbirth.”

Global health authorities measure child marriage rates in countries around the world as a percentage of girls and women aged 15-49 that were married before they turned 18.

For Afghanistan, the rate for the most recent data (2020) stands at 28 percent. While that may seem high, it is far from the world’s worst – Niger tops the rankings at 76 percent, followed by Central African Republic (68 percent) and Chad (67 percent).

Afghanistan’s child marriage numbers have steadily improved since U.S.-led forces toppled the Taliban in the aftermath of 9/11 in 2001. Prior to the invasion, the rate was 61.9 percent, among the world’s worst. But it dropped markedly over the following years – to 40 percent in 2014, 33 percent in 2016, and 28 percent by 2020.

With the Taliban back in control, there are concerns that a combination of the economic crisis and stricter interpretations of Islam followed by the regime may see a reversal in that progress.

Afghan teenage girls in Mazar-i-Sharif. The rate of child marriages in Afghanistan (the proportion of women who were married younger than 18)“ is 28 percent. (Photo by Farshad Usyan/AFP via Getty Images)

During times of instability, “families tend to marry off their daughters early for their protection from sexual exploitation, to maintain family honor and to make financial gains,” according to a comprehensive 2018 UNICEF study on child marriage in Afghanistan.

“[I]n Deobandi Islam, to which the Taliban adheres, it is very common for older men to believe that they have the right to marry off underage girls whenever they see fit, which can explain to some degree the higher number of cases of child marriage during the Taliban regime.”

The payment of a dowry has some basis in Islamic teaching, although the Qur’an refers to a groom paying a gift (called a “mahr”) to the bride, whereas in many societies including Afghanistan the dowry goes to the bride’s family.

According to the 2018 study, “low-income families tend to marry off their daughters at a young age in exchange for the mahr, the mandatory payment to the bride, which unlike what Islamic law requires goes to the family of the bride, not to the bride.”

“In addition, since the dowry is usually higher for younger girls, parents in need of the financial assets can choose to marry off their daughter early for a better amount of money in dowry. This combination of economic need and religious sanction has resulted in a widely undertaken practice.”

“In Afghanistan, a country that strongly prioritizes Islam and the teachings of the Qur’an, misinterpretation, willful or otherwise, may contribute to the normalization of child marriage.”

‘De-link these practices from religion’

According to the “Girls Not Brides” campaign, the phenomenon of child marriage cuts across cultures, regions and religions.

Even so, of the ten countries with the highest rates of marriage under the age of 18, eight are members of the Organization of Islamic Cooperation (OIC) – Niger, Chad, Bangladesh, Mali, Mozambique, Burkina Faso, Guinea and Somalia. The two countries in the top ten that are not members of the Islamic bloc are Central African Republic and South Sudan.

The OIC disputes that there is any link between Islam and child marriage.

“Child marriage, violence against women as well as other negative acts perpetuated are often misidentified as being part of Islamic tradition, whereas they are part of the local tradition and we should raise awareness at the local level to de-link these practices from religion,” it said in a statement delivered during a session of the U.N. Commission on the Status of Women in 2013.

The same year, the OIC secretary-general in a speech described child marriage, along with violence against women and female genital mutilation, as “cultural practices disguised as part of Islamic tradition.”

In Iran, girls may marry as young as eight years and nine months old, with the permission of their fathers or a court – or failing that, as young as 13.

According to an authoritative Hadith – the traditions and sayings of Islam’s prophet – Mohammed consummated his marriage to Aisha, the youngest of his dozen wives and concubines, at the age of nine. They had married when the child was six.