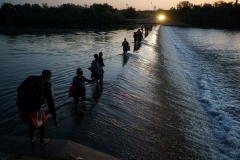 (CNSNews.com) – Almost three weeks into October, the U.S. Customs and Border Protection (CBP) still has not publicly released the number of “encounters” with migrants trying to enter the U.S. illegally at the southwest border in September.

When released, that data will provide final figures for the just-ended fiscal year, and show whether the number of apprehensions of illegal migrants along the U.S.-Mexico border in FY 2021 sets an all-time record high.

The Washington Post reported Wednesday that the September number will be 192,000 apprehensions.

If that is confirmed, then FY 2021 will account for a record high number of apprehensions on the southwest border -- around 1,733,651.

In fact, if the figure for September is any higher than 102,028, then the total for the fiscal year will be the highest recorded to date.

CBP data on apprehensions along the U.S.-Mexico border date back to 1960. It also has apprehension figures going back to 1925, although they apply to nationwide encounters so are somewhat higher than those for the southwest border alone.

It’s not clear why CBP has not yet releasing the data for September. In recent months, figures for each month have been made public between the 10th and 16th of the following month.

Earlier this week President Biden’s nominee for commissioner of the CBP, Chris Magnus, conceded during a Senate Finance Committee confirmation hearing that the situation on the southwest border was deeply problematic.

“I agree, we have some significant challenges at the border,” Magnus said in response to questioning from ranking member Sen. Mike Crapo (R-Idaho).

“The numbers are very high, and it is something that has to be addressed. Clearly we have a broken system,” he said. “So yes, senator, I will commit to enforcing the law.”

Under questioning from Sen. James Lankford (R-Okla.) Magnus, who is currently police chief in Tucson, Ariz., said “surges” of people crossing the border had been taking place for years.

“We’ve never had a surge like this,” Lankford interjected. “This is the highest number ever in the history of our country.”

“Senator, I understand your concerns and I don’t disagree with you that the numbers are – are very high,” Magnus said. “But the bottom line still remains that, you know, first and foremost we need to enforce the law.”

“And secondly, we need to have a process that’s humane and efficient, so we can deal with those who are coming across the border, whether it be to seek asylum or for other purposes.”