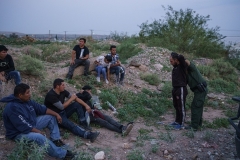 (CNSNews.com) – The number of “encounters” with migrants trying to enter the U.S. illegally at the southwest border and coming from countries other than Mexico and the “northern triangle” climbed to a new high of 61,484 in August – a 1,690 percent increase from the same month last year.

The majority of migrants apprehended along the southern border while trying to get into the U.S. illegally come from Mexico and the northern triangle countries of Guatemala, Honduras and El Salvador.

But when those numbers are excluded, the number of apprehensions of migrants originating from all other countries has reached 308,294 so far this fiscal year, which runs through the end of September.

Migrants from Colombia accounted for one of the larger increase in the number of encounters last month, more than doubling from 751 in July to 1,563 in August.

Among countries accounting for larger numbers of migrants being apprehended, encounters with migrants from Haiti were up 37 percent, from 5,510 in July to 7,580 in August, and from Cuba were up 26 percent, from 3,557 to 4,494.

Overall, the CBP reported a total of 208,887 encounters on the southwest border in August, making it the second highest monthly number since fiscal year 2000.  The highest was recorded just one month earlier, at 213,534.

The CBP said 25 percent of the August encounters involved individuals who had had at least one prior encounter during the previous 12-month period.