State Dept. Challenged Over Claim That the Taliban Cares About International Legitimacy 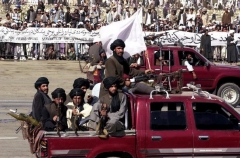 Taliban gunmen on parade in Kabul in August 2001, weeks before al-Qaeda attacked America on 9/11 attack and two months before U.S. forces toppled the regime. (Photo by Saeed Khan/AFP via Getty Images)

(CNSNews.com) – The notion that the Taliban cares about international legitimacy or support and will temper its conduct accordingly was disputed during a State Department briefing on Tuesday.

At a time when Taliban fighters are seizing control of districts in the north and elsewhere in Afghanistan as the U.S. and NATO troop withdrawals continue, spokesman Ned Price told reporters that any entity that seizes power in Kabul by force or violates human rights will never win international support.

“What we know is that the world will not accept an imposition by force of a government in Afghanistan,” he said, while appearing to refer to talking points on the podium in front of him.

Price highlighted the fact that the fundamentalist group also continues to engage in a negotiation process.

The Associated Press’ Matt Lee pressed Price on that issue.

“I don’t understand how you’re able to make this claim that the Taliban actually want international acceptance and aid when there is nothing in their history that suggests that they do,” he said.

Lee said that fact that some Taliban officials are talking in Doha “doesn’t mean anything.”

“They never wanted or cared about – they were perfectly happy when Pakistan was the only country on the planet that recognized them,” he said.

Price did not concede the point.

“The notion that the Taliban don’t believe in a negotiated political solution – you yourself said that they are engaged in Doha,” he told Lee. “Again, it’s not just the process. It’s the outcomes that we’re interested in, and that’s what we’ll be watching for.”

Price said that “all parties” in Afghanistan appear to understand that a political solution is the only way the conflict will end. He pointed to a comment by a Taliban spokesman – to Reuters on Monday – that intra-Afghan peace talks would be “accelerated in the coming days.”

Asked what was the point of referencing statements by the Taliban when the group’s actions in Afghanistan were contrary to what it was saying, Price replied, “We will see.”

‘A superior model of governance’

When the Taliban, from the mid-1990s, ruled most of Afghanistan under the name “Islamic Emirate of Afghanistan,” it was recognized by just three countries – Pakistan, Saudi Arabia and the United Arab Emirates.

Under Taliban rule, Afghan women and girls were denied schooling and were largely forbidden to work outside the home. According to State Department reports at the time, the compulsory wearing of Islamic garb was enforced and restrictions on their freedom were “widespread, institutionally sanctioned, and systematic,” with women also “subjected to rape, kidnapping, and forced marriage.” 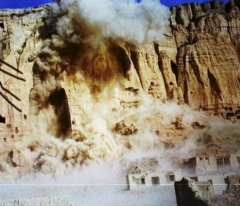 The 175-feet-high Buddhas, carved into sandstone cliffs at Bamiyan, Afghanistan, were destroyed by the Taliban on March 12, 2001. (Photo by CNN via Getty Images)

Afghanistan’s Shi’ite minority was repressed, and the Taliban destroyed artifacts from pre-Islamic times, including two colossal 6th century Buddha statues in the town of Bamiyan, ignoring international appeals to desist.

The group in 2001 shut down offices of Christian relief agencies and expelled foreign employees, again dismissing global sentiment. (It also arrested foreigners, including two American women, accusing them of seeking to convert Muslims to Christianity.)

The U.S. toppled the regime in October 2001, after it refused to surrender its al-Qaeda allies following the 9/11 terror attack on America.

Almost 20 years later the group is eyeing the hoped-for return of its “Islamic Emirate” with little in its rhetoric to indicate that it has modernized its views significantly.

“[W]hy must a system with foreign roots be forcefully implemented in Afghanistan when Afghans possess a superior model of governance?” the Taliban said in a commentary posted on its website in April, arguing that all past attempts to install “non-Islamic forms of governance” in Afghanistan have failed.

“Everything from politics, economics, culture and education to social life must be follow our religious values,” it said in another article at the time. “This is because Afghans do not desire the elimination of military aggression alone, but also the termination of western political, cultural and ideological invasion.”

Even as the Taliban says it continues to engage in dialogue, its spokesmen make clear that it does not envisage a negotiated settlement of any variety that does have the “Islamic Emirate” as its end result.

In a weekend commentary the group disputed claims that the troop pullout will result in civil war, saying that won’t happen because Afghans who have been affiliated to the Kabul administration are already flocking to the Taliban.

“We are seeing large groups of forces trained by the invaders defecting, laying down their weapons, renouncing their ties and being warmly welcomed by the Islamic Emirate on a daily basis,” it said.

“The centers of over 120 districts as well as hundreds of military outposts and bases along with all its military hardware and weaponry was handed over to the mujahideen of Islamic Emirate – aiding the establishment of comprehensive peace in all these regions over prolongation of war.”