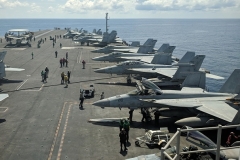 (CNSNews.com) – China’s foreign ministry on Tuesday again hinted at the possibility that Beijing could declare an air defense identification zone (ADIZ) over South China Sea, one day after the U.S. government for the first time rejected the legality of most of China’s maritime claims in the strategic waterway.

“Every nation has the right to set up an ADIZ and will determine whether to do so based on the level of security threats it faces in the air, which is also the case with China,” spokesman Zhao Lijian told a briefing.

“We will take into account various factors, including the security threats we face above the relevant waters in the South China Sea, and meticulously and carefully study the relevant issue.”

The ministry has made similar remarks over recent weeks when asked about reports that an ADIZ declaration over the resource-rich waterway is looking increasingly likely. The commander of the U.S. Pacific Air Force warned last month that such a move would impinge on international airspace, impacting not just PACAF but other nations in the region too.

A Chinese-instituted ADIZ over the South China Sea would require all civilian aircraft to report their presence and flight plans to Chinese authorities, even though the airspace they are flying through is not China’s – and even if they are not headed for Chinese territorial airspace. In theory non-cooperative aircraft could be confronted.

ADIZs are not generally controversial, although Japan and the United States both protested when Beijing in 2013 declared one over a large area of the East China Sea.

China said it was needed to protect its “state sovereignty and territorial and airspace security,” but the move was widely seen as an attempt to enforce control over a group of islands claimed by China and Japan (known as Senkaku in Japan and Diaoyu in China.)

In the South China Sea, China is locked in maritime and territorial disputes with Vietnam, the Philippines, Malaysia, Taiwan, and Brunei.

Beijing claims virtually all of the 648,000 square miles of the waterway – everything within the vaguely-demarcated “nine-dash line” on official Chinese maps which tracks the coastline of Vietnam, skirts the coast of Malaysian Borneo and Brunei, then runs up along the western edges of the Philippines towards Taiwan.

A decade ago, Beijing first began to describe issues of sovereignty in both the South and East China Seas as a “core interest,” a term it had previously reserved for priority security issues like Tibet and Taiwan.

In the ensuing years it ratcheted up claims, carried out campaigns of reclamation and militarization of atolls, clashing at times with neighboring countries over contested areas.

The U.S. has long avoided taking a position on the sovereignty claims – which it says must be resolved peacefully through arbitration – while insisting on the right of its naval vessels to conduct training and other “freedom of navigation” operations in the sea. (Most recently, two aircraft carrier groups carried out joint exercises in the area last week, drawing sharp protests from Beijing.)

But that policy shifted partially on Monday, when Secretary of State Mike Pompeo declared that “Beijing’s claims to offshore resources across most of the South China Sea are completely unlawful, as is its campaign of bullying to control them.”

Pompeo’s statement went on to refer to contested underwater features – reefs and shoals – rather than to islands above sea level.

“The world will not allow Beijing to treat the South China Sea as its maritime empire,” he said. “America stands with our Southeast Asian allies and partners in protecting their sovereign rights to offshore resources, consistent with their rights and obligations under international law.”

‘For thousands of years’

The announcement coincided with the fourth anniversary of a decision by an international tribunal rejecting Beijing’s claims to waters within the Philippines’ exclusive economic zone (EEZ) – the 200 nautical mile-wide area recognized under the U.N. Convention on the Law of the Sea.

The panel declared that China’s “nine-dash line” provided no legal basis for its claims to the area falling inside it.

China has refused to recognize the ruling, but Pompeo reiterated the U.S. view that the decision is final and legally binding on both parties. (The U.S. is not a party to the UNCLOS, but both China and the Philippines are).

Pompeo’s Philippines counterpart, Defense Secretary Delfin Lorenzana, welcomed the announcement, saying his country strongly agreed “that there should be a rules-based order in the South China Sea” and urging China to abide by the tribunal ruling.

Monday’s statement was one of a series of administration moves aimed at pushing back at troubling Chinese policies and actions. It was followed on Tuesday by President Trump’s signing of legislation authorizing sanctions against officials responsible for undermining Hong Kong’s autonomy and their bankers, and an executive order ending the special treatment Hong Kong was afforded under U.S. law after its return to Chinese rule in 1997.

At Tuesday’s briefing in Beijing, Zhao responded at some length to Pompeo’s South China Sea announcement, saying that it “violates and distorts international law, deliberately stokes territorial and maritime disputes, and undermines regional peace and stability.”

He reiterated Beijing’s claims that “China has effectively exercised jurisdiction over relevant islands, reefs and waters in the South China Sea for thousands of years.”

Zhao accused the U.S. – which he pointedly noted is “a country outside the region” – of going to great lengths to try sow discord between China and other countries in the region.

“We strongly deplore and firmly oppose the wrong move by the U.S. and urge it to stop stirring up trouble on the South China Sea issue and stop continuing down the wrong path.”