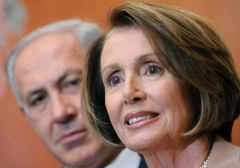 (CNSNews.com) – On the eve of the White House signing of historic accords between Israel, the UAE and Bahrain, Secretary of State Mike Pompeo on Monday repudiated House Speaker Nancy Pelosi’s jibe that President Trump’s  progress in the Middle East is a “distraction” from the coronavirus crisis.

“So cynical,” Pompeo said of Pelosi’s disparaging evaluation of the first normalization agreements between Israel and Arab countries in 26 years.

“It’s a remarkable accomplishment,” he told Fox News’ Martha McCallum. “The administration of President Trump has set the conditions for peace in the Middle East. There’s real progress.”

In a video message recorded in Washington on Monday, Netanyahu said he held in his hands a draft peace treaty with the UAE, and a separate declaration of peace with Bahrain.

The two Arab states that have agreed to recognize Israel in recent weeks are the first to do so since Jordan signed a peace agreement with Israel in 1994. Egypt signed the first such treaty, in 1979. Regional experts have attributed the U.S.-brokered developments in part to a shared recognition of the threat Iran poses both to Israel and the Arab Gulf states.

(In a separate move, Kosovo has agreed as part of a U.S.-negotiated agreement to recognize Israel. If it makes good on its pledge it could become the first Muslim-majority country to locate its embassy in Jerusalem, rather than Tel Aviv.)

In an interview with Pelosi late last week, CNN’s Wolf Blitzer asked her how much credit she gives Trump for what he called the “dramatic developments in the Middle East.”

(Trump unveiled his Mideast peace vision last January; The Palestinian leadership has up to this point rejected it – while also condemning Arab states’ willingness to recognize Israel absent a settlement of the Palestinian issue.)

Pompeo told McCallum the White House signing Tuesday would be “a great day.”

“I remember Secretary [of State John] Kerry saying that if the nuclear was abandoned, that Israel would become more isolated,” he recalled, “when in fact just the opposite has now happened.”

“They’ve joined hands and now they have many more partners across the region,” Pompeo said, adding that Israel and the Gulf states “recognize that the shared threat from the Islamic Republic of Iran is very, very real, and now they are working together, building out security and economic relationships, and real ties between these countries.”

Facing considerable opposition on Capitol Hill to the newly-concluded Iran nuclear deal in mid-2015, Kerry told a Council on Foreign Relations audience that “emotion” was governing people’s thinking about the agreement.

“I fear that what could happen is if Congress were to overturn it, our friends in Israel could actually wind up being more isolated,” he said.

Congress did not reject the accord, however, and it took effect the following January. In 2018, Trump withdrew from what he described as “the worst deal in history.”

The Council on American-Islamic Relations (CAIR), Code Pink, and dozens other organizations are planning to protest near the White House during Tuesday’s signing ceremony.

“The ‘historic deal’ with the UAE and Israel does not move the Middle East any closer to peace,” said Code Pink co-founder Medea Benjamin. “On the contrary. It strengthens the Israel-US-Gulf alliance against Iran, which will further inflame tensions and cause more death and suffering, while maintaining Israel’s status quo of occupation and apartheid.”