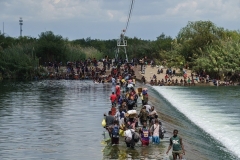 Migrants, many of them Haitian, cross the Rio Grande near Del Rio, Texas in September. (Photo by Paul Ratje/AFP via Getty Images)

(CNSNews.com) – The record-breaking figures for “encounters” with migrants trying to enter the U.S. illegally at the southwest border during fiscal year 2021 include sizeable month-on-month increases in September in the number of apprehended migrants from Haiti, Russia, Turkey, India, Ukraine, and China, even though the overall total was somewhat down, from 209,840 in August to 192,001 in September.

The most striking increase from August to September was the number of Border Patrol encounters with migrants from Haiti, which more than doubled, from 7,580 in August to 17,638 last month (an increase of 132.7 percent), according to Customs and Border Protection (CBP) data released on Friday.

The monthly figures have been climbing for most of 2021, exceeding 170,000 every month since March, a situation which Biden administration officials have avoided calling a crisis.

The majority of migrants apprehended along the southern border having entered the U.S. without relevant documentation come from Mexico and the northern triangle countries of Guatemala, Honduras and El Salvador.

In September, migrants from those four countries accounted for 63.7 percent of all migrant encounters along the border (122,304 of the total 192,001). That marks a 21 percent drop from the August figure of 148,322 encounters from Mexico and the northern triangle.

Of the other 15 nationalities whose figures are broken down in the CBP data only three, Nicaragua, Ecuador, and Canada, accounted for decreases in the number of border apprehensions from August to September (from 9,979 to 7,298 encounters with Nicaraguans, from 17,611 to 7,353 with Ecuadorians, and from 10 to 6 with Canadians).

Encounters with migrants from all the other nationalities appearing in the data increased in number, with Haiti in the lead.

The number of apprehensions of Colombians, Haitians, Russians, Turks, Ukrainians and Venezuelans during September were significantly higher than those recorded for the same month in 2019.

In the case of Brazilians, Cubans, Ecuadorians, Indians, Nicaraguans and Romanians, the number of encounters in September fell in comparison to the same month two years ago.