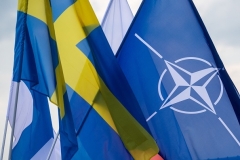 (CNSNews.com) – Finland and Sweden edged closer to NATO membership on Wednesday when the U.S. Senate in a 95-1 vote approved the move, a decision which one senior Republican called “probably one of the easiest votes” he will ever make.

President Biden said after the vote that he looked forward to signing the accessions protocols. Once he does, that will leave just seven of the 30 NATO allies yet to ratify membership for the two Nordic nations, which shed historical neutrality and applied to join the alliance after Russia invaded Ukraine.

The lone “no” vote came from Sen. Josh Hawley (R-Mo.), who argued that the U.S. has the choice between devoting more military resources to Europe, or doing “what we need to do in Asia to deter China – we cannot do both.”

“We cannot strengthen our deterrent posture in the Pacific if we’re sending more forces and resources to Europe to defend new allies,” Hawley said. “That’s the bottom line.”

Senate Foreign Relations Committee ranking member Sen. Jim Risch (R-Idaho) disagreed. “This is probably one of the easiest votes I’ll ever make in the United States Senate,” he said.

Describing NATO as “the most successful political and military alliance in the history of the world,” Risch said that one could debate whether or not some of the countries admitted to the alliance over the years had been “sufficient,” but there was “little if any argument” when it came to Finland and Sweden.

Senate Minority Leader Mitch McConnell highlighted strong Finnish and Swedish defense cooperation with NATO and the U.S., and said that even closer cooperation with them would help to counter both Russia and China.

“Their accession will make NATO stronger and America more secure,” McConnell said. “If any senator is looking for a defensible excuse to vote no, I wish them good luck. This is a slam-dunk for national security that deserves unanimous bipartisan support.”

Before the vote on the resolution, the Senate passed by voice vote an amendment proposed by Sen. Dan Sullivan (R-Alaska) saying all NATO allies must spend at least two percent of their GDP on defense and devote 20 percent of their defense budgets on “major equipment, including research and development,” by 2024.

Allies agreed on the two percent of GDP target at a summit in 2014, although two years out from the 2024 deadline, only nine of the 30 have hit the mark. They are the United States, Britain, Croatia, Estonia, Greece, Latvia, Lithuania, Poland, and Slovakia. (Finland is closer to doing so than most current allies.)

The Senate also considered an amendment introduced by Sen. Rand Paul (R-Ky.) stating that article 5 of the North Atlantic Treaty – the provision that an attack on one ally is considered an attack on all – “does not supersede the constitutional requirement that Congress declare war before the United States engages in war.”

The amendment was defeated 10-87, with nine other Republicans joining Paul in supporting it.

In the subsequent vote on the resolution itself, Paul voted “present.”

The last time the Senate voted on a NATO accession resolution, for the small Balkans nation of North Macedonia in 2019, Hawley voted in favor. Paul and Sen Mike Lee (R-Utah) were the sole “no” votes on that occasion.

NATO membership decisions require the ratification of all current allies.

The most recent ratification vote prior to the U.S. one took place in France’s National Assembly on Tuesday – and was a lot less decisive than the U.S. Senate’s, passing by 209 votes to 46.

Only seven NATO members have yet to give their approval to admitting Sweden and Finland, according to the Helsinki daily Helsingin Sanomat. They are the Czech Republic, Greece, Hungary, Portugal, Slovakia, Spain, and Turkey.

President Recep Tayyip Erdogan in late June dropped his opposition to their accession, but disputes remain, and he has warned since then that if Sweden and Finland fail to abide by their agreements to act against those groups, their membership bids could be blocked.