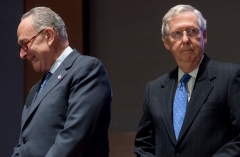 (CNSNews.com) – Senate Republicans accused Democrats Thursday of prioritizing “picking fights with the White House” over funding for America’s armed forces, after the minority blocked a defense spending bill for the second time.

Several Republicans saw irony in the fact that the stalled legislation includes military aid for Ukraine – the very issue Democrats are seeking to impeach President Trump over, alleging he delayed assistance to Kyiv for his own political purposes.

Democrats countered that it is the Republicans who are preventing progress, by insisting on including in the legislation funding for Trump’s wall along the U.S.-Mexico border.

“A bill that’s supposed to provide resources for our troops and their families, actually steals money from them and puts it toward a border wall that President Trump promised Mexico would pay for,” said Minority Leader Charles Schumer (D-N.Y.) before the vote on a spending package that includes funding for defense.

The vote to advance the legislation was 51-41, short of the 60 votes needed. Democratic Sens. Doug Jones (Ala.) and Gary Peters (Mich.) voted yes. Among the eight senators who did not vote were all six Democrats running for their party’s 2020 presidential nomination.

Ahead of the vote, McConnell cited both the Middle East and Ukraine. The bill provides $745 million for training and equipping forces fighting against ISIS, and $250 million for a security assistance program for Ukraine that includes training, equipment, lethal assistance, and intelligence support.

“The same Democrats who have recently rediscovered hawkish-sounding positions on Syria and the Middle East are really going to filibuster $755 [sic] million for the Counter-ISIS train and equip fund, for Iraq and Syria?” he asked.

“The same Democrats whose latest effort to impeach the president hinges on delayed military assistance to Ukraine are themselves – are themselves going to filibuster funding for the exact same program, the Ukraine Security Assistance Initiative? Really? It looks like it.”

“The Democratic Party is too busy impeaching President Trump for supposedly slow-walking assistance for Ukraine to fund the exact same program themselves,” McConnell charged.

After the vote Sen. Tom Cotton (R-Ark.) weighed in: “Democrats claimed that they could impeach the president and still do the people’s business. Today’s vote against funding our troops and protecting our borders proves they can’t.”

“Not only that, Democrats just voted to block security assistance to Ukraine for political reasons – the very thing they accuse the president of doing,” said Cotton, a U.S. Army combat veteran. “It’s time for the Democrats to get over their obsession with the president and get back to work.”

“It is the Republicans who are holding both military funding and Ukraine aid hostage to President Trump’s vanity wall,” he said.

It was the second time Senate Democrats had blocked progress on the bill. On September 18 the vote was 51-44, similarly short of the 60 required.

Republicans said Democrats were putting their opposition to the president above the needs of America’s armed forces.

“The core message here is hard to miss: Our Democratic colleagues have a priority list,” said McConnell. “Picking fights with the White House is priority number one. Number one. And our men and women in uniform fall somewhat farther down.”

“Unfortunately, my Democratic colleagues seem more, at the moment, more focused on scoring political points than ensuring our military – that our military has the certainty and the funding it needs to counter our adversaries.”

“Funding America's military should be our priority,” said Shelby. “It should come first here in the U.S. Senate.”