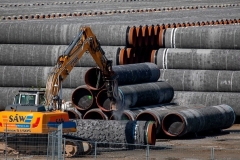 Pipes for the Nord Stream 2 gas pipeline wait on a Baltic Sea island. (Photo by Odd Andersen/AFP via Getty Images)

Cruz said if the Biden administration genuinely doesn’t want to be “soft on Russia, they could actually follow the mandatory law and stop the pipeline.”

During an exchange with Deputy Secretary of State-nominee Wendy Sherman, Cruz recalled that bipartisan legislation signed into law in late 2019 had frozen the Nord Stream 2 pipeline project through 2020, but that “mixed signals” from the new administration “have been heard by Putin.”

“And so Putin, after ceasing building the pipeline for a year, has gone back to building the pipeline. Because Putin and Russia believe the Biden administration will not hold them accountable, will allow them to complete this pipeline, which would put billions of dollars in Putin’s pockets to be used against America, against Europe.”

The U.S. under the current and previous administrations has opposed the $11 billion project, which aims to double the amount of Russian natural gas currently supplied to Germany, through a 760-mile pipeline under the Baltic Sea.

Critics say it will increase Europe’s energy dependence on a government with a long track record of using its energy supplies to advance its foreign policy objectives. Nord Stream 2 will also allow Russia to bypass, or reduce the use of, existing pipelines crossing Ukrainian territory, depriving Kyiv of sorely-needed revenue in transit fees

The European Parliament has voted three time in opposition to Nord Stream 2 – a 433-105 vote in Dec. 2018 for a resolution describing it as “a political project that poses a threat to European energy security and efforts to diversify European energy supplies,” in a 402-163 vote in March 2019, and a resounding 581-80 vote last January, a measure linked to the poisoning and jailing of anti-Putin campaigner Alexei Navalny.

U.S. law requires the State Department to report to Congress on companies that are involved in the project, and as a result are subject to U.S. sanctions. But in an overdue report last month, the department named only two entities already sanctioned by the Trump administration, and other companies that have already withdrawn, or are in the process of doing so – in many cases as a result of the former administration’s outreach.

Congressional Republicans called the move inadequate, and Cruz added to the criticism on Wednesday.

“It didn’t include any entities that are plainly in violation, not even the company that is actually constructing the pipeline Congress has instructed the president to sanction.”

After Cruz suggested the administration was “going soft on Russia,” Sherman defended it, saying Secretary of State Antony Blinken “has spoken at length about ways in which Russia threatens our country and I –”

Cruz said that if Nord Stream is completed, it will be the administration’s fault – although he added that he hoped that would not happen.

“I want that to be a bipartisan victory, and a victory for the United States.”

Sherman told the panel that even if confirmed, she would not have the authority to make decisions unilaterally on sanctions relating to the pipeline project.

“But I can say to you that I will do everything I possibly can to ensure that Nord Stream 2 does not go forward.”

But responding to a question about sanctions, she replied that “sanctions are only one of many important tools to ensure energy security.  So we’re also going to work with our allies and partners to reinforce European energy security and to safeguard against the sort of predatory behavior we have warned against.”

One of Washington’s most important allies in Europe, however, is Germany, Russia’s partner in the controversial pipeline. Berlin continues to defend it as a purely commercial project that will benefit Europe.