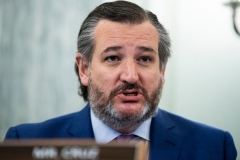 (CNSNews.com) – Sen. Ted Cruz (R-Texas) in the early hours of Wednesday morning blocked the confirmation of dozens of State Department nominees ahead of the Senate’s summer break, to protest the administration’s position on the Nord Stream 2 pipeline.

During a lengthy back-and-forth with Senate Foreign Relations Committee Chairman Robert Menendez (D-N.J.) and Sen. Chris Murphy (D-Conn.), Cruz one by one reserved “the right to object” to almost 30 nominees.

They included nominees for ambassadorships to countries ranging from Vietnam to Somalia, and picks for assistant secretaries of state, dealing among them with political and military affairs, international narcotics, and European, East Asian, South Asian and African affairs.

“All of the senators in this chamber know precisely why these nominees have not moved forward,” Cruz said. “The reason is because the Biden administration is currently engaged in open defiance of the United States Congress, and is doing so in a way that is working serious and material harm to the United States’ national security.”

He was referring to the administration’s decision earlier this year to waive sanctions against the key players in the Nord Stream 2 project, which when completed aims to double the amount of Russian natural gas currently supplied to Germany, through a 760-mile pipeline under the Baltic Sea.

It then struck an arrangement with Germany, which it says aims to lessen the risks of Russia using the pipeline as a tool for energy blackmail – but effectively allows the project to be completed without further U.S. action designed to stop it.

“Vladimir Putin desperately wants this pipeline completed,” Cruz said. “If the pipeline is completed, it will give billions of dollars to Putin to use for malign efforts in Europe and throughout the world. This Congress is overwhelmingly convinced that completing the Nord Stream 2 pipeline is terrible policy. It is bad for the United States, it is bad for Europe, and it is good for Russia and Putin.”

Legislation authored by Cruz and Sen. Jeanne Shaheen (D-N.H.), mandating sanctions against the pipeline, passed the Senate and House in December 2019.

Cruz recalled that on the day President Trump signed the measure into law, work on the project immediately came to a halt, in what he called “a bipartisan national security victory for the United States.”

It only resumed after the November 2020 presidential election, Cruz said, after Biden and his foreign policy team “began signaling weakness on Nord Stream 2.”

(A project spokesman confirmed on December 11, 2020 that work had resumed.)

Cruz said he believes the Biden administration’s decision to waive the sanctions – against Nord Stream 2 AG, a consortium led by the Russian state-owned Gazprom, and its corporate officers and CEO – “will prove to be a generational geopolitical mistake.”

“Not only that. Europe will be captive to Russian natural gas. It will be subject to energy blackmail. We don’t have to hypothesize this, because Putin has demonstrated his willingness to use energy blackmail on Europe going forward.”

‘Until it is 100 percent complete, it transmits zero natural gas’

Cruz did offer what he suggested would be a path forward, offering a new resolution imposing sanctions against Nord Stream 2, calling for Senate unanimous consent and House passage, and saying that on the day the president signs the measure into law, he will lift the “holds” on the nominees.

Menendez objected, however, saying the legislation had not gone through the Senate Foreign Relations Committee for “a full vetting.”

“I know that the senator believes that he can dictate to the president of the United States who’s duly elected by the American people, what the foreign policy should be,” he said.

“I believe we should have a role in foreign policy, I share that with the senator, but you can’t say ‘if it passes the Senate, if it passes the House, [is] signed by the president, then I will release my hold.’”

“I mean that – I guess that would be nice if the senator could accomplish it for his goals, but it’s not the way the system ultimately works.”

At a briefing later Wednesday, White House press secretary Jen Psaki said the administration was “frustrated over the slow pace of confirmations, particularly for non-controversial nominees.”

“It’s important for us around the world to have qualified ambassadors who are confirmed by the Senate to lead our country and represent our country at this point in time,” she said. Psaki did not mention Cruz.

The administration argues that although it firmly opposes Nord Stream 2 the project was 90 percent complete by the time it took office, and there was nothing that sanctions could have done to prevent its completion. It also indicated that sanctions would have harmed relations with Germany, an important ally.

Russia’s ambassador to Germany said this week construction of the pipeline is in its final stages and will be “completed in a matter of weeks,” the TASS news agency reported on Monday.