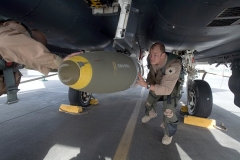 (CNSNews.com) – Sen. Rand Paul (R-Ky.) urged the administration on Thursday not to condition final troop withdrawal from Afghanistan on having a “perfect deal” with the Taliban, which he said was unlikely to happen.

In an exchange with Secretary of State Mike Pompeo during a Senate Foreign Relations Committee hearing, Paul argued instead in favor of threatening military consequences if the Taliban again shelters terrorists posing an international threat – but consequences that could take the form of bombing rather than a return of large numbers of troops.

“The threat should be that if you harbor terrorists that are organizing international terrorism that, you know, there will be military repercussions,” he said. “But those don’t have to be landing 50,000 troops. It might be landing 50,000 bombs.”

Under an agreement concluded with the Taliban last February, the U.S. pledged to reduce the number of troops in Afghanistan from 12,000-13,000 to 8,600 by mid-July. The Pentagon said this month that target had been met.

The remaining troops would then be withdrawn by the end of next April, providing the Taliban complies with its commitments in the accord, most notably severing the links with al-Qaeda that precipitated the U.S. invasion in the first place following the 9/11 attacks.

The top U.S. commander in the region has voiced doubts about the Taliban’s willingness to act against al-Qaeda, however, and lawmakers on both sides of the aisle have expressed opposition to a total troop withdrawal absent certain conditions being met.

But Paul, who has been pushing for years for an end to the war, warned against thinking which he said leads to the U.S. finding itself “stuck.”

“When we look at trying to end the Afghan war, I think in some ways we are stuck, in the sense that people have decided we can only leave with some sort of treaty with the Taliban.”

The problem with that, he said, was that “the Taliban aren’t necessarily trustworthy, and if we leave under the agreement that they have to meet certain parameters – which is what we’re looking towards – and then they break those parameters, we’re right back in, you know, with the threat to stay in.”

Paul said the threat that needs to be made is that if the Taliban harbors terrorists, there will be military repercussions. (He contended that that should perhaps have been the threat directed at the Taliban 20 or 30 years ago.)

Alluding to the notion of a so-called nation-building undertaking in Afghanistan, Paul said, “We’re still stuck in this idea of, we have – we’ve occupied this acreage and we have to do something with it, you know, and we can’t leave until it’s perfect. It’s never going to be perfect there.”

Paul urged the administration not to base its decision on a final withdrawal from Afghanistan on having a “perfect deal.”

Taliban gunmen and supporters in Laghman province celebrate the agreement signed with the U.S. in February. (Photo by Noorullah Shirzada/AFP via Getty Images)

Pompeo reiterated that President Trump has laid down two missions – to reduce the number of troops and the threat to U.S. personnel there, and to ensure that “there’s not a terror attack that emanates from that space.”

The expectation was to reduce troops numbers to zero by next spring, he said, and “we’re looking to do that on terms that make sure we protect America ...”

Early this month Paul tried unsuccessfully to insert into the National Defense Authorization Act (NDAA) an amendment designed to speed up and ensure the full withdrawal of troops from Afghanistan.

Speaking in favor of the amendment, Paul noted that the NDAA included a sense of the Senate provision opposing a “precipitous” withdrawal from Afghanistan.

“We’ve been there for 20 years,” he said on the Senate floor. “How can we characterize withdrawal after 20 years, after we defeated the enemy, as ‘precipitous’? It’s crazy.”

Paul said that American people were “ready to declare victory and to come home.”

“It’s why President Trump’s message resonated with so many. He said it’s time to come home, and the people agreed.”