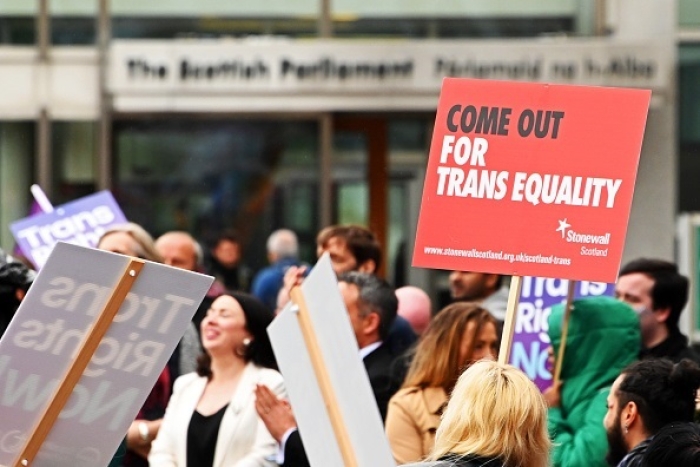 Protesters demonstrate outside the Scottish Parliament in Edinburgh in favor of changes to gender recognition legislation. (Photo by Ken Jack/Getty Images)

(CNSNews.com) – The British government on Monday took the unusual step of blocking a law passed by the Scottish parliament. The law removes a requirement that people wanting to change their legal gender must have a medical diagnosis of gender dysphoria.

The Scottish legislation also sought to lower the age of people wanting to change legal gender from 18 to 16.

And it would have allowed someone to apply to change their legal gender – through the issuing of a “gender recognition certificate” (GRC) – after having lived as their “acquired gender” for just three months (or six months for 16- and 17-year-olds), rather than two years as currently required. The applicant would have to make a statutory declaration to that effect.

Supporters of the legislation argued that the process now in place is arduous and unfair to already vulnerable individuals, who should be allowed to “self-declare” their gender rather than having to consult a doctor and seek a medical diagnosis.

Opponents include women’s rights advocates who say the law changes would impact access to single-sex spaces, like changing rooms and women’s shelters, and so undermine women’s and girls’ rights and potentially their safety.

They said that removing the requirement of a gender dysphoria diagnosis “and denying the important medical oversight that goes with it, will inevitably reduce the opportunity for crucial healthcare, support, and protection for vulnerable individuals, including children.”

“Children must be protected from making permanent legal declarations about their gender which may lead to irreversible elective interventions, including surgery,” the bishops said. “Lowering the minimum age from 18 to 16 and introducing a system of self-identification will put more children and young people on this path.”

Since Scotland acquired a devolved executive and parliament in the late 1990s, responsible for powers in certain but not all areas, the British government has never before blocked a Scottish bill on the basis that it is deemed to have an “adverse effect” on U.K. law.

On Monday, the British government’s minister responsible for Scotland, Alister Jack, cited a provision in 1998 Scotland Act that allows it to do so.

“After thorough and careful consideration of all the relevant advice and the policy implications, I am concerned that this [Scottish draft] legislation would have an adverse impact on the operation of Great Britain-wide equalities legislation,” he said in a statement.

Jack stressed that his decision was based on the Scottish legislation’s consequences for the operation of the Equality Act, anti-discrimination legislation that applies in England, Scotland, and Wales.

“Transgender people who are going through the process to change their legal sex deserve our respect, support and understanding,” he said.

Despite that sentiment, Jack’s decision drew furious responses from politicians in Scotland, with one minister, social justice secretary Shona Robison, calling it “a dark day for trans rights and a dark day for democracy in the U.K.”

Scotland’s First Minister and Scottish National Party (SNP) leader Nicola Sturgeon accused the British government of a “full-frontal attack” on the Scottish Parliament and vowed to defend the legislation, warning that if the veto issued in Westminster succeeds, “it will be the first of many.” 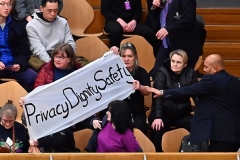 Women opposed to the Scottish gender recognition legislation are confronted while holding up a banner in the public gallery of the Scottish Parliament during the vote last month. (Photo by Ken Jack / Getty Images)

Responding to Sturgeon’s “full-frontal attack” charge, the lobby group For Women Scotland, which campaigned against the legislation, tweeted, “Ofc [of course], having to deal with ‘full-frontal attacks’ in changing rooms because of your mad bill, is one of the big issues for women...”

In a letter to Sturgeon, Jack cited concerns, including the impact of the Scottish legislation on “the operation of single-sex clubs, associations and schools, protections such as equal pay and chilling effects on single-sex spaces.”

The advocacy group Scottish Trans Alliance called the British government’s move “unacceptable” and said it fully expects the Scottish government to fight it in the courts.

“The bill as passed would introduce a simpler and fairer way for trans men and women to be legally recognized as who they truly are, allowing them to live with the dignity we all deserve,” said the group’s manager, Vic Valentine.

The law passed in the 129-member Scottish Parliament by 86 votes to 39. The majority of “no” votes came from the Scottish Conservative and Unionist Party, joined by a handful of SNP and Labour members, most of whose colleagues supported the bill.

The British government has already taken steps in recent years to ease the process of applying for a GRC. After a process of public consultation, it introduced changes that included allowing an individual to apply online for a certificate. It also lowered the application fee from 140 pounds ($170) to a nominal five pounds ($6.10).

Between 2005 and the end of 2021, a total of 6,181 GRCs were granted. Relatively few applications are turned down – annual percentages of rejections range from a low of 1.7 percent of applications to a high of 8.5 percent.