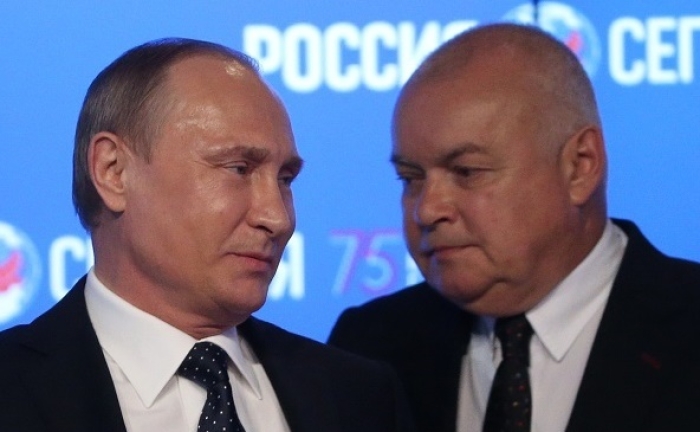 President Vladimir Putin and pro-Kremlin propagandist Dmitry Kiselyov at a media forum in Moscow in 2016. (Photo by Mikhail Svetlov/Getty Images)

(CNSNews.com) – Senior Russian officials are tamping down speculation that the war in Ukraine could turn into a nuclear conflict, but on state television propagandists are promoting a different message, complete with visual representations depicting Russian nuclear attacks against European capitals.

On Sunday night, the pro-Kremlin TV host Dmitry Kiselyov said Russia could easily wipe out Britain, according to a translated video clip posted by a member of the BBC News’s specialist media monitoring service.

Responding to statements by British Prime Minister Boris Johnson and Foreign Secretary Liz Truss, Kiselyov asked, “Why threaten never-ending Russia with nuclear weapons when you’re on an island which, you know, is so small?”

Illustrating his point, a map contrasted the expanse of Russia with the British Isles, and then showed a simulation of a missile launched from north-western Russia, striking Britain.

“The island is so small that just one Sarmat missile is sufficient to sink it once and for all,” he continued.  “Everything’s been calculated already.”

The Sarmat is Russia’s new intercontinental ballistic missile (ICBM) which President Vladimir Putin, after testing it ten days ago, declared was “capable of overcoming all modern means of anti-missile defense.”

Kiselyov turned to another new Russian weapon, a nuclear-powered and nuclear-armed unmanned underwater vehicle known as the Poseidon. Russia has said it boasts “unlimited range,” and could be used against aircraft, coastal fortifications and infrastructure. It is not yet known to be operational.

“Another option is to plunge Britain into the depths of the sea using Russia’s unmanned underwater vehicle Poseidon,” Kiselyov said, adding – again with the help of graphics – that with a warhead with a yield of up to 100 megatons, an underwater detonation would trigger a huge tsunami that would swamp the British Isles.

Whatever was left, he said, would be turned into “a radioactive desert, unfit for anything for a long time.”

Kiselyov, a senior figure in Russian state media operations, has been under European Union sanctions since 2014 for his role in promoting propaganda in support of the Kremlin’s annexation of Crimea.

Late last week, another program on state TV featured a discussion among hosts and guests which included graphics depicting nuclear missiles launched from Russia’s westernmost territory of Kaliningrad, reaching Berlin in 106 seconds, Paris in 200 seconds, and London in 202 seconds.

One of the guests, the head of the nationalist pro-Kremlin Rodina (“Motherland”) party, Aleksey Zhuravlyov, said those images should be shown to Russia’s enemies.

“Guys look at this picture, count the seconds. Can you make it? Hello, it’s already here! Get a stopwatch, count 200 seconds,” Zhuravlyov said. “That’s how you talk to them. They don’t understand anything else.”

The U.S. government has described veiled nuclear threats by senior Russian officials as irresponsible and dangerous.

Putin on Wednesday warned of “lightning-fast” strikes in response to any outside intervention in the Ukraine war that creates a strategic threat to his country, saying Russia has the necessary weaponry, “the likes of which no one else can claim at this point.”

Foreign Minister Sergei Lavrov two days earlier said that although Russia holds to the principle of the “inadmissibility” of nuclear war, the danger of it breaking out was “serious, real” and “cannot be underestimated.”

In an interview with an Italian television network on Sunday, however, Lavrov said his words had been misrepresented by Western media. He emphasized again the “inadmissibility” of nuclear war, pointing out that Russia had initiated a joint statement to that effect early this year by the five declared nuclear powers.

Similar comments came from another senior Russian official at the weekend.

Vladimir Yermakov, head of the foreign ministry’s department for non-proliferation and arms control, told the TASS state news agency that Russia expects all nuclear states to abide by “the January statement.”

Asked about the dangers of a nuclear conflict in the current climate, Yermakov accused the U.S., Britain, and France of increasingly moving away from the “inadmissibility” principle, along with “the whole of NATO, which is positioning itself as a nuclear alliance.”

“These countries have openly chosen the strategy of conducting proxy wars against Russia,” he said. “Such brinkmanship is fraught with very serious consequences.”

Pentagon Press Secretary John Kirby said Friday the U.S. military was continuing to monitor Russian nuclear capabilities, “as best we can,” and was “comfortable with the strategic nuclear deterrent posture that we have in place to defend the homeland and defend our allies and partners.”

Asked if concerns about Russia using a nuclear weapon were overblown, Kirby replied, “You have a nation the size of Russia with a nuclear arsenal their size and capability and a leader that is clearly as belligerent as Vladimir Putin, we have to take seriously the escalatory rhetoric that he and his leaders have been using lately.”

He said that if the U.S. military has to make changes, it will do so, but “as I said, we have seen no reason to change our nuclear strategic deterrent posture at this time.”