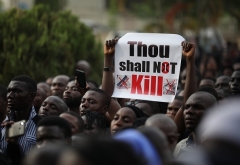 Nigerian Christians hold a prayer rally in Abuja for peace in their country and to denounce the killing of Christians by Islamist insurgents and kidnappings for ransom. (Photo by Kola Sulaimon/AFP via Getty Images)

(Update: In a joint press conference with Secretary of State Antony Blinken in Abuja on Thursday, Nigerian Foreign Minister Geoffrey Onyeama said his government welcomed the fact “that you have recognized that Nigeria need not be a country of concern as far as religious freedom is concerned.” Neither Onyeama nor Blinken was asked a question about the decision.)

(CNSNews.com) – The Biden State Department on Wednesday announced its first designations of religious freedom violators, adding Russia to the blacklist for the first time but – in a decision advocates found puzzling – delisting Nigeria.

The removal of Nigeria from the CPC list came a day before Blinken arrived in Abuja for a visit to Africa’s most populous nation.

Under the 1998 International Religious Freedom Act (IRFA), CPCs are defined as countries that have engaged in or tolerated “systematic, ongoing, and egregious violations of religious freedom.”

Nigeria was designated a CPC just a year ago, a development of note since it was the first secular democracy to be blacklisted since the IRFA established the process more than two decades ago. Every other CPC over the years has been an Islamic, communist, or military-ruled authoritarian state.

According to Open Doors, more Christians are killed for their faith in Nigeria than in any other country, mostly at the hands of Boko Haram and other Islamist groups.

On Open Doors 2021 watchlist of “countries where it is most dangerous to follow Jesus,” Nigeria is ranked ninth worst of 50 countries named.

Yet not only did Blinken remove Nigeria from the CPC list this year, he also left it off a second-tier “special watch list” – countries determined to be religious freedom violators but not meeting the statutory criteria for CPC designation.

“It’s unfathomable that Secretary Blinken removed Nigeria from being a CPC for its religious freedom violations, and excluded the country altogether from its lists,” said Nadine Maenza, chair of the U.S. Commission on International Religious Freedom (USCIRF).

“Conditions on the ground haven’t changed, so why has the designation?”

Maenza urged the State Department to reconsider the decision, “based on its own reporting.”

Secretary of State Antony Blinken greets Nigerian Vice President Yemi Osinbajo in Abuja on Thursday, one day after announcing that Nigeria was being removed from the list of ‘countries of particular concern’ for religious freedom violations. (Photo by Andrew Harnik / Pool /AFP via Getty Images)

“The Nigerian government has done almost nothing to stop the violence against Nigerian Christians, leading to continued violent persecution,” said the group’s president, Jeff King.

“In some instances, as with Kaduna’s Governor El-Rufai, the Nigerian government has even furthered the violence,” he said. “We will continue to raise the voices of the many victims of Nigeria with the U.S. government and will continue to serve Nigeria’s Christian community.”

Blinken’s announcement came a day after ICC published its annual “persecutor of the year awards,” with Nigeria named the worst persecuting country.

According to the ICC, the Nigerian government has not only failed to adequately respond to violence against Christians, but in some cases itself perpetuates the persecution – including the governments of the 12 northern states where shari’a is enforced.

Over one weekend in September, Muslim militants killed 49 people in two Christian villages in the northern state of Kaduna, days after a violent mob in neighboring Kano state attacked and killed a Christian pastor, accusing him of involvement in a local Muslim’s conversion to Christianity.

While the USCIRF was disappointed with some of Wednesday’s decisions, it applauded the addition of Russia for the first time.

“USCIRF has proposed this action since 2017,” said the commission’s vice-chair, Nury Turkel. “For years, USCIRF has raised the alarm regarding the Russian government’s purge of ‘non-traditional’ religions and religious freedom repression.”

Russian government repression has focused on groups it calls “cults” and “extremist organizations,” such as the Jehovah’s Witnesses which it outlawed in 2017, and the Church of Scientology, labeled “undesirable” last September.

The State Department’s most recent annual religious freedom report says Russian authorities in 2020 were reported to be continuing to “investigate, detain, imprison, torture, and and/or physically abuse persons or seize their property because of their religious faith, including members of groups the government classified as extremist and banned.”

The USCIRF, an independent statutory watchdog established by the IRFA, each year makes its own CPC and special watch list recommendation to the executive branch.

Although Afghanistan was not placed on the special watch list, the Taliban – which seized power in mid-August – is named as one of nine “entities of particular concern,” non-state actors that engage in systematic, ongoing, and egregious violations of religious freedom violations.

The IRFA provides for the imposition of sanctions against CPCs, among other measures designed to encourage governments to improve, although in some cases – including Saudi Arabia, Pakistan, and Tajikistan – administrations have invoked “national interest” waivers.