(CNSNews.com) – Hailing an “unprecedentedly high level” of relations between them, the presidents of Russia and China on Monday announced the extension of a 20-year old treaty which includes an approximation of NATO’s mutual defense commitment.

At a virtual summit marking the 20th anniversary of the treaty of “good neighborliness, friendship and cooperation,” Vladimir Putin and Xi Jinping discussed ways in which their countries cooperate on an international stage dominated by a superpower whose policies they firmly reject.

In a joint statement they stressed the need to jointly uphold the international system with the United Nations at the core, and to oppose unilateral sanctions and attempts by outside countries to interfere in their domestic affairs under the guise of promoting democracy and human rights.

They agreed to extend by another five years the treaty signed in July 2001 by Putin and then-Chinese President Jiang Zemin.

In that document, Russia and China declared their intention to build a strategic partnership based on mutual respect for sovereignty, territorial integrity, mutual benefit, non-aggression, and non-interference in each other’s internal affairs.

They pledged no first use of nuclear weapons against each other and, in the treaty’s article nine, to support each other in the face of outside aggression:

“When a situation arises in which one of the contracting parties deems that peace is being threatened and undermined or its security interests are involved or when it is confronted with the threat of aggression, the contracting parties shall immediately hold contacts and consultations in order to eliminate such threats,” the article reads.

The Putin-Xi meeting came shortly after President Biden participated in a round of summits in Europe where a wide range of security, economic and diplomatic challenges posed by Russia and China featured prominently.

Biden took the opportunity to underline the “rock solid and unshakable” U.S. commitment to article five of NATO’s North Atlantic Treaty, which states that an attack on any member of the alliance is considered an attack on all.

He then went on to hold a closely-watched summit with Putin, with the two agreeing to cooperate in some areas despite their strained relationship.

In Monday’s video call, Putin and Xi agreed that the world has entered a period of turmoil. 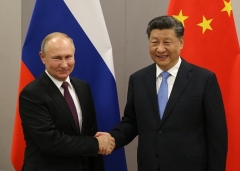 “Amid the growing geopolitical turbulence, the disruption of arms control agreements, and swelling conflict potential in various parts of the world, Russian-Chinese coordination is playing a stabilizing role in global affairs,” Putin said.

“Over the past two decades, we have managed to significantly increase foreign policy cooperation, which we regard as one of the key components of our strategic partnership,” he said, also referring to Russia-China relations having reached “an unprecedentedly high level.”

Putin cited their coordination in dealing with the crisis on the Korean peninsula, the conflicts in Syria and Afghanistan, and efforts to salvage the Iran nuclear deal.

The two touched on a number of contentious issues in their relations with West, including opposition to sanctions imposed outside the remit of the United Nations, and opposition to “outside interference” in their internal affairs.

The U.S. has targeted both countries for sanctions over issues ranging from Russian intervention in Ukraine and the use of chemical agents on dissidents to China’s mass-scale rights abuses in Xinjiang and the erosion of democratic freedoms in Hong Kong.

China invokes the “interference” principle frequently, in connection with criticism of its policies in Xinjiang, Hong Kong, Tibet, and its dealings with Taiwan, which the communist government views as a rebellious province. Russia, too, refers to criticism of its annexation of Ukraine’s Crimea as interference in its “internal” affairs.

Putin and Xi said they jointly oppose the stigmatization and politicization of the coronavirus pandemic (alluding to U.S.-led criticism of China’s handling of the outbreak) and the politicization of sports (a reference to Western calls to boycott or limit participation in the Winter Olympics which Beijing is due to host next year.)

In speaking about “foreign policy cooperation” over the past two decades Putin did not refer directly to the U.N. Security Council, but the collaboration between the two non-Western permanent members has been evident there over the years since the friendship treaty was signed.

Russia and China issued their first-ever joint veto in 2007 (to kill a resolution on Burma). Since then the two have partnered in vetoing 12 more resolutions (one each on Zimbabwe and Venezuela, but the majority on the Middle East and Syria.)

From the U.N. General Assembly to U.N. agencies such as the Human Rights Council, World Health Organization and the International Atomic Energy Agency (IAEA), Russian and Chinese votes invariably coincide.

The CCP organ Global Times said in an editorial Russia and China are better able to coordinate positions than the U.S. and its Western allies were.

The 2001 treaty marked a turning point in relations between Moscow and Beijing. Although joint declarations in the late 1990s had referred to the need for a new world order based on “multi-polarization” – a reaction to a “unipolar” order dominated by U.S. “hegemony” – earlier years had seen relations between the two communist neighbors range from lukewarm to suspicious to openly hostile.

Military cooperation between Russia and China has also advanced since the treaty was signed. Since 2005 their armed forces have held regular joint exercises, and in 2008 the two defense ministries set up a direct hotline – a first ever for China. Naval wargames began in 2012.