Rubio on FBI Mar-a-Lago Raid: ‘This is What Happens in Places Like Nicaragua … They’re Playing With Fire’ 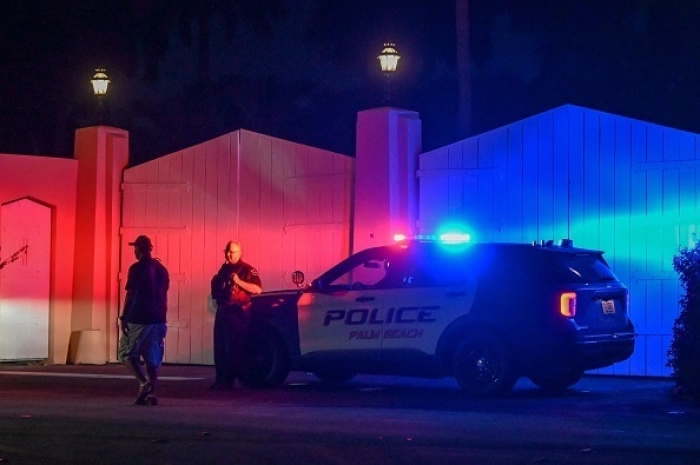 A police vehicle is seen outside Mar-A-Lago on Monday night. (Photo by Giorgio Viera/AFP via Getty Images)

(CNSNews.com) – The Biden Department of Justice was “playing with fire” by sending the FBI to raid former President Trump’s home in Florida, Sen. Marco Rubio (R-Fla.) warned on Monday night, saying it was regimes like that of Daniel Ortega in Nicaragua that target political opponents.

“That’s what you see in places like Nicaragua; we’ve never seen that before in America,” Rubio said. “You can try to diminish it, but that’s exactly what happened tonight.”

Trump in a statement earlier said that a “large group” of FBI agents had raided his Mar-a-Lago residence in Palm Beach, saying that they “even broke into my safe,” and describing the incident as “political persecution.”

“After working and cooperating with the relevant Government agencies, this unannounced raid on my home was not necessary or appropriate,” he said, charging that radical Democrats “desperately don’t want me to run for President in 2024, especially based on recent polls.”

The DOJ is investigating the January 6, 2021 riot at the U.S. Capitol and Trump’s actions surrounding the events.

However, the New York Times reported that, “according to two people familiar with the investigation,” the search appeared to be focused on potentially classified material taken from the White House to Trump’s Florida residence when he left office.

There was no early confirmation of the raid from the FBI or Department of Justice, but Republican lawmakers and governors and former Trump administration officials reacted angrily to the news. 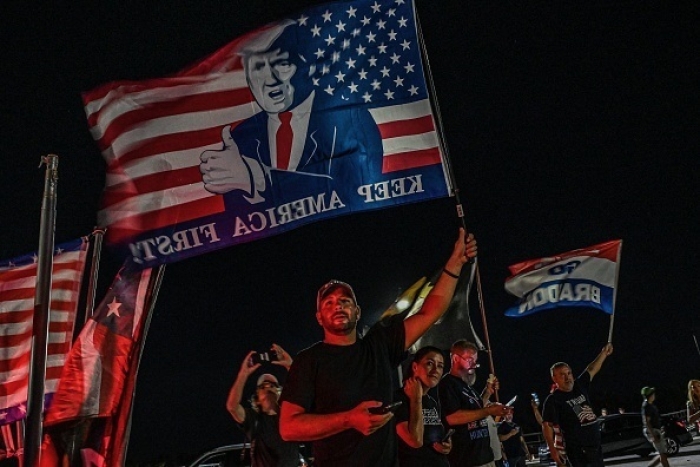 Supporters of former President Trump arrived outside his residence in Mar-A-Lago, Florida on Monday night, after he said in a statement it was being raided by the FBI. (Photo by Giorgio Viera/AFP via Getty Images)

Minority Leader Kevin McCarthy (R-Calif.) in a statement vowed that if Republicans win the House in the midterm elections they will investigate the DOJ, which he said had “reached an intolerable state of weaponized politicization.”

“Attorney General Garland, preserve your documents and clear your calendar.”

Florida Gov. Ron DeSantis called the raid “another escalation in the weaponization of federal agencies against the Regime’s political opponents.”

Arkansas Gov. Asa Hutchinson in a tweet called the search “unprecedented & alarming” but added, “We must see the probable cause affidavit before making a judgment.”

In a video clip, Rubio said that although divisive politics has always existed in the U.S. to varying degrees, “we’ve never been a country where people who take power – like becoming president – now use that power to persecute their past or future political opponents.”

“We’ve never seen that – until tonight, when the Justice Department under Joe Biden decided to raid, using 30 FBI agents, the Mar-a-Lago home of the former president, who might in fact be running against him in a couple of years.”

“That’s what you see in places like Nicaragua; we’ve never seen that before in America. You can try to diminish it, but that’s exactly what happened tonight.”

Rubio said disputes over documents and the National Archives have occurred in multiple administrations, but Monday night’s raid had been “for one purpose, and that is to try to politically harm and intimidate their political opponents.”

“They’re playing with fire,” he said. “Go cheer about it or be giddy about it on MSNBC, on CNN, with all these idiot commentators, but I’m telling you you’re playing with fire. This is dangerous, because someone else will be in power one day, and now you have created the precedent for them to do this back to you.”

“And then we become the Third World,” Rubio said. “And then we lose our country and our system of government, and the meaning of being one nation under a real Constitution.”

Former Secretary of State and CIA director Mike Pompeo said it was “dangerous” to execute a warrant against a former president.

“The apparent political weaponization of DOJ/FBI is shameful,” he tweeted. “AG must explain why 250 yrs of practice was upended w/ this raid.”

Pompeo recalled that as a member of Congress he served on an investigation into the deaths of four U.S. diplomats in a terror attack on the U.S. Consulate in Benghazi, Libya, on Sept. 11, 2012.

He said the inquiry had proven that then-Secretary of State Hillary Clinton “possessed classified info [on her private email server]. We didn’t raid her home.”