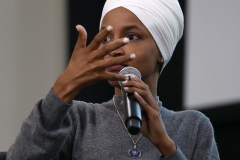 The bill to create a special envoy on 'Islamophobia' was authored by Rep. Ilhan Omar (D-Minn.), along with Rep. Jan Schakowsky (D-Ill.). (Photo by Chip Somodevilla/Getty Images)

(Update: The House Foreign Affairs Committee on Friday approved the Combating International Islamophobia Act in a party line vote. Rep. Chabot’s amendment referred to in the story below was defeated, also along party lines. Majority Leader Steny Hoyer said the bill would receive a House floor vote on Tuesday.)

(CNSNews.com) – A bill to create a special envoy to monitor and combat “Islamophobia” ran into Republican opposition in the House Foreign Affairs Committee on Thursday, as critics pushed for amendments to define the phenomenon – and some were themselves accused by Democrats of Islamophobia.

Authored by Reps. Ilhan Omar (D-Minn.) and Jan Schakowsky (D-Ill.), the Combating International Islamophobia Act would create an “Office to Monitor and Combat Islamophobia” at the State Department, headed by a special envoy.

The bill, which enjoys the strong backing of the Council on American-Islamic Relations (CAIR), would require the State Department to include specific data relating to Islamophobia in its annual human rights and international religious freedom reports.

“In the past 20 years we have seen a staggering rise in Islamophobia worldwide,” Omar said, citing anti-Muslim atrocities in China and Burma; abuses in India; the plight faced by Muslim migrants in Hungary, Poland, and Belarus; and terror attacks like the 2019 mass shooting at two mosques in New Zealand.

“Violence against Muslims simply because of our faith runs counter to everything we believe as Americans,” Omar said, urging bipartisan support for the bill.

But GOP committee members argued that Islamophobia needs to be clearly defined to avoid misuse of the proposed envoy post.

Offering an example of the type of problems that could arise in the absence of a clear definition, Rep. Brian Mast (R-Fla.) recalled an incident last summer when Omar came under fire for comments appearing to equate Israel and the United States with terrorist groups.

A dozen Jewish Democrats led by Rep. Brad Schneider (Ill.) in a statement then deplored Omar’s remark. In turn, Omar accused her Democratic colleagues of “harassment” and of engaging in “Islamophobic tropes.”

Equating the United States and Israel to Hamas and the Taliban is as offensive as it is misguided. Ignoring the differences between democracies governed by the rule of law and contemptible organizations that engage in terrorism at best discredits one’s intended argument and at worst reflects deep-seated prejudice.

The United States and Israel are imperfect and, like all democracies, at times deserving of critique, but false equivalencies give cover to terrorist groups. We urge Congresswoman Omar to clarify her words placing the US and Israel in the same category as Hamas and the Taliban.

“The author of this bill [Omar] said that letter is filled with Islamophobic tropes,” Mast said. “If anybody wants to say that these are Islamophobic tropes that I’ve just read, I’m happy to hear it. But this is why it’s so important to speak specifically about what’s going on here.”

“This is what’s happening on the left,” he said. “Anything and everything is simply thrown out there and labeled as the hot button ‘phobia’ of the moment.”

Mast invited Omar, who was participating remotely, to respond. She did not do so immediately, but when she did ask for the floor, suggested Mast was engaging in “theater."

“I do think we have a responsibility as members of Congress to participate in legitimate debate and not to engage in childish shenanigans,” Omar said. She did not address the question of the Schneider letter or the issues raised.

Among proposed amendments to the bill, Rep. Steve Chabot (R-Ohio) offered one that would exclude what he called “legitimate, non-violent, evidence-based criticism” from statements or actions or material that would be regarded as Islamophobic.

He gave as examples: denouncing “Islamic fundamentalist terrorism,” condemning the mistreatment of women by the Taliban, calling out the persecution of Christians in Nigeria, combating “the brutal blasphemy laws in Pakistan,” and calling out those “calling for the destruction of Israel as a Jewish state.’

“Of course not all Muslims support these types of positions and I don’t mean to suggest that they do,” Chabot said. “But I think that we can all agree that criticism of these things is not Islamophobic.”

“So I would urge the adoption of this amendment. I think we need to define exactly what Islamophobia is.”

Committee chairman Gregory Meeks (D-N.Y.) objected to the amendment, and said that it was itself “Islamophobic.”

“I do believe that the amendment in and of itself is Islamic – Islamophobic, and plays into the Islamophobic trope of ‘not all Muslims are terrorists, but all terrorists are Muslim,’” Meeks said. “Demeaning women, persecuting people because of their faith – these are not things that are unique or specific to any religion.”

Rep. Scott Perry (R-Pa.) challenged Meeks on his characterization of Chabot’s amendment as Islamophobic, saying it was “disrespectful” to Chabot who was trying in good faith to make the bill better.

“None of these things are false,” he said, referring to the points raised by Chabot. “I’m looking for the falsities.”

Perry also predicted that anyone voting no on the bill would be labeled Islamophobic, tarred “with yet another bigoted epithet.”

“That’s going to be the theater, ladies and gentlemen. Regardless of the fact that there’s no definition in here about what that means.”

Rep. Andy Barr (R-Ky.) said some Democrats were themselves proving the need to have Islamophobia defined – by calling the offered amendments Islamophobic.

Without a definition, he said, the bill was “a wolf in sheep’s clothing.”

The debate, along with deferred recorded votes on the Chabot and other amendments, was suspended and is expected to resume today.