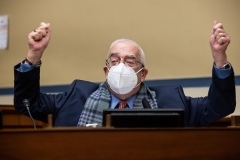 (CNSNews.com) – A House Foreign Affairs Committee markup of a global health security bill got testy on Thursday, as Democrats suggested that an amendment citing China would be insensitive at a time when Asian Americans are facing harassment as a result of the coronavirus pandemic.

Rep. Gerry Connolly (D-Va.) linked the issue with last week’s shootings at three Atlanta area massage parlors in which six Asians were among the eight victims – even though the suspected shooter denied any racial motive, and investigators had yet to reach a contrary conclusion.

Republican committee members pushed back, pointing out that whistleblowers in Wuhan who sought to draw attention to the virus outbreak early – and were silence and punished by the authorities – were themselves Chinese.

It establishes a strategy for U.S. foreign assistance to developing countries to strengthen global health security, and it requires the president to submit to Congress a report on the strategy’s implementation.

An amendment proposed by Rep. Scott Perry (R-Pa.) sought to make that report include a determination on the extent of research conducted in Chinese research facilities, particularly at the Wuhan Institute of Virology; and a strategy for ensuring maximum readiness against future pandemics in light of China’s “historic refusal to cooperate on issues of global health security.”

“A discussion of this legislation cannot go without mentioning the lack of global health security as a result of the actions of the Chinese Communist Party,” Perry told the markup. “This amendment does not ask for anything except accountability.”

“We simply must acknowledge that the main reason we’re discussing global health security today is because of China.”

The Wuhan Institute of Virology in Wuhan – the Chinese city where the outbreak was first identified – studied bat coronaviruses and carried out gain-of-function research for several years. The theory that the virus may have somehow leaked from the lab, while still a theory, has yet to be definitely ruled out.

Gain-of-function experiments are designed to enhance the ability of a pathogen to cause a disease. The aim is to help inform experts on the pandemic potential of an emerging virus, to help improve preparedness and develop countermeasures.

When Connolly took the floor, he raised the issue of race.

“We just witnessed eight people mowed down in a violent gun attack in Atlanta, Georgia. Six of those people were Asian Americans,” he said. “All across America our fellow Americans – Asian Americans, of Asian American descent – are expressing fear and anger about a pattern of harassment and hate in correlation with a pandemic for which they bear responsibility but all too many fellow Americans blame them.”

Alluding to former President Trump, Connolly said when key figures speak about the “China” or “Wuhan” virus they apparently don’t understand that some of their listeners then “blame Asian Americans for something they are blameless for.”

Connolly said including Perry’s amendment “would be a slap in the face of grieving Asian Americans all over our country.”

‘We’re conflating things where we shouldn’t’

Rep. Steve Chabot (R-Ohio) said it was “perfectly legitimate to call out Beijing” and disputed that there were any “racial overtones” to the amendment.

“Should every white person in the United States of America take offense and feel at risk because somebody is calling out white supremacy within our country? I don’t think that we would jump to that conclusion,” Mast said. “Nor should we jump to it, because we are pointing to the origins of a pandemic, that every person of Asian descent should feel as though we are somehow pointing a finger at them when we’re talking about a specific origin.”

“That would be hyperbolic in both instances, in my opinion, to do so.” 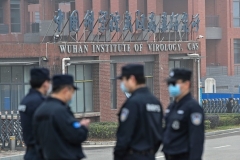 Rep. Karen Bass (D-Calif.) pushed back, saying that “since President Trump started calling it the ‘China virus’ there has been a massive increase in hate crimes directed towards Asians,” and that many of the perpetrators specifically link their actions to the pandemic.

“There is no such correlation between denouncing white supremacy and then white Americans being concerned,” she said. “And I am very concerned that after a year of vitriol from the [Trump] administration, that it is not shocking to me that we had what happened last week.”

Rep. Mark Green (R-Tenn.) pointed out that scientists who were silenced by Beijing because they took the position that the authorities were suppressing the truth about the outbreak “were Asian – they were Chinese.”

“So this isn’t about any demographic,” he said. “This is about the leadership of a country who even suppressed and ‘disappeared’ their own Chinese – Asian people – scientists, from telling the truth about the origins of the virus and the truth about its spread.”

“Making this somehow a racial thing, sure it may serve some political agenda, but it has no purpose in this committee.”

Noting that a racial motive has yet to be determined in the Atlanta shootings, Green said, “we’re conflating things where we shouldn’t.”

The accused in the Atlanta shootings, Robert Aaron Long, says he was motivated by a sex addiction, not racial hatred.

Experts and commentators continue to debate motive. Long has been charge with eight counts of murder and one count of aggravated assault, and officials have said there is no evidence yet to file federal hate crimes charges.