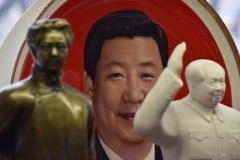 A decorative plate featuring an image of Chinese Communist Party leader and President Xi Jinping is seen behind statues of Mao Zedong at a souvenir store at Tiananmen Square. (Photo by Greg Baker/AFP via Getty Images)

(CNSNews.com) – Communist China persecutes more people, from more religious backgrounds, than any other country in the world, a member of the U.S. Commission for International Religious Freedom said on Tuesday.

Speaking during the virtual release of the independent watchdog’s annual report, one of the nine commissioners, Gary Bauer, said the USCIRF was recommending that the U.S. government “single out by name individuals in communist China that are particularly responsible for the persecution,” with the view to freezing their assets and preventing them from entering the United States.

“The Chinese government makes it absolutely clear that they believe Chinese citizens cannot, must not have any loyalty higher than their loyalty and commitment to the Chinese Communist Party – which is why China is becoming such a global problem,” he said.

“This is a country that persecutes more people, more different religions, than any other country in the world.”

Bauer said Beijing was furthermore “attempting to export their model around the world.”

“They’re using their influence in international bodies to intimidate other countries into not speaking out about their religious liberties and human rights abuses,” he said.

The USCIRF’s annual report elaborates on that activity, saying the Chinese government “reportedly used its economic and diplomatic leverage to dissuade some governments from criticizing its record” on religious freedom.

It noted that the Organization of Islamic Cooperation (OIC), which purportedly represents the interests of the world’s Muslims, passed a resolution in March last year commending China for “providing care to its Muslim citizens.”

At a time when the world is grappling with a pandemic that first emerged in China, Bauer noted that that country “is in the news for a lot of other reasons that are not within the purview of the commission.”

“But when you have a country that persecutes so overwhelmingly like this, based on religion, you can expect them to be a bad actor on many other things of concern to the world community,” he said.

China is alleged to be holding more than a million minority Muslim Uighurs in reeducation camps in Xinjiang province.

It says the U.S. should also publicly express concern about Beijing hosting the 2022 winter Olympics, “and state that U.S. government officials will not attend the games if the Chinese government’s crackdown on religious freedom continues.”

And the commission calls on the government to “intensify efforts to counter Chinese government influence operations in the United States that are designed to suppress information about or advocacy in response to violations of religious freedom in China.”

China is one of nine countries designated by the State Department as “countries of particular concern” (CPCs) for egregious and systematic religious freedom violations. The other eight are Burma, Eritrea, Iran, North Korea, Pakistan, Saudi Arabia, Tajikistan, and Turkmenistan.

The USCIRF recommended that those eight countries remain on the CPC blacklist, and that the State Department also add five others – India, Nigeria, Russia, Syria, and Vietnam.

It also recommended that the State Department place 15 countries on a second-tier Special Watch List (SWL), for countries that are problematic but do not meet statutory criteria for CPC designation.

The commission comprises nine unpaid commissioners, appointed by political leaders on a bipartisan basis. Decisions on recommendations for CPC or SWL designations are taken by majority vote, and commissioners who disagree may have their individual views recorded.

This is the first time the commission has made a CPC recommendation for India since 2004, and the decision was not unanimously supported, with Bauer and two other commissioners, Tenzin Dore and Johnnie Moore, dissenting from the decision.

Nadine Maenza, one of the commission’s two vice-chairs, said India under the Hindu nationalist BJP government accounted for “perhaps the steepest, and most alarming, deterioration in religious freedom conditions” last year.

She cited that passage late last year of the Citizenship Amendment Act (CAA), a law that provides a path to citizenship for religious minorities who have fled persecution in Pakistan, Afghanistan and Bangladesh, but limits eligibility to non-Muslims.

“This potentially exposes millions of Muslims to detention, deportation, and statelessness when the government completes its planned nationwide National Register of Citizens,” Maenza said. “In addition, the national and various state governments have tolerated widespread harassment and violence against religious minorities.”

Reacting to the report and recommendations, Arielle Del Turco, assistant director of the Center for Religious Liberty at the Family Research Council, welcomed the recommendation on India.

“Indian leaders are sure to fight this accusation, but they have often been the ones to incite violence against religious minorities or look the other way when it occurs,” she said.