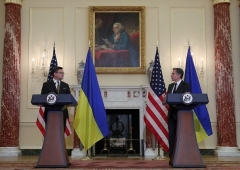 (CNSNews.com) – Secretary of State Antony Blinken and his Ukrainian counterpart appeared to disagree Wednesday over whether Russia is once again using its energy supplies to Europe “as a weapon” – a key factor in the Biden administration’s approach towards the controversial Nord Stream 2 pipeline.

At a joint press availability with Foreign Minister Dmytro Kuleba at the State Department, Blinken mentioned that Russia has used energy as a weapon “in the past,” and said the U.S. was closely watching to see if it does so again.

But Kuleba moments later indicated that as far as Kyiv is concerned, “Russia is already using gas as a weapon.”

Whether or not President Vladimir Putin has already crossed that line again is significant because the administration last summer – in a move criticized by GOP members of Congress and lawmakers in Ukraine – struck an understanding with Germany that effectively gave the green light for Nord Stream 2 to go ahead. Earlier the administration had controversially waived sanctions against the key players in the project.

The U.S.-Germany arrangement was meant to mitigate the risks posed to Ukraine by the new pipeline carrying Russian natural gas to Germany under the Baltic seabed.

Ukraine earns crucial revenues from Russian gas transiting its territory through existing pipelines to markets to the west. The reduction or loss of those earnings would heavily impact Ukraine’s economy.

The agreement between the Biden and Merkel administrations made clear that any Russian attempt to use Nord Stream 2 to disadvantage Ukraine would be countered, including through sanctions.

“Should Russia attempt to use energy as a weapon or commit further aggressive acts against Ukraine, Germany will take action at the national level and press for effective measures at the European level, including sanctions, to limit Russian export capabilities to Europe in the energy sector, including gas, and/or in other economically relevant sectors,” it said.

No longer deterred by U.S. sanctions threats, the pipeline was duly completed, and in September the German energy regulator began to consider its license application, a formal process that normally takes four months.

Europe gets around 35 percent of its natural gas from Russia, with Germany the biggest consumer.

Some European lawmakers suspect that Russia has reduced gas supplies to Europe in recent months – sending prices soaring – in a ploy designed to underscore the importance of the new pipeline and try to speed up the certification process.

At Wednesday’s briefing, Blinken was asked about concerns that Moscow was trying to ensure the “speedy certification” of the pipeline “by delivering less gas to Europe.”

“We see Europe facing a challenging energy picture, and in the first instance, Russia could and should take steps to alleviate the energy crunch by increasing gas supplies, something that it could do,” he said.

“In the past, we have seen Russia use energy as a weapon, as a political tool, and we’re watching very carefully for any signs of a repeat of those kinds of efforts that it’s made in the past.”

Recalling the “very important” U.S.-Germany agreement, he said, “Should Russia attempt to use energy as a weapon or commit further aggressive acts against Ukraine, we are committed and Germany is committed to taking appropriate action.”

Kuleba, however, then said, “What we see is that Russia is already using gas as a weapon.”

“And I can only echo what Secretary Blinken said: We are looking forward to seeing actions taken by Germany, because Germany has a leverage on Russia, and the commitments undertaken in the joint U.S.-German statement are very clear.”

Kuleba added that “Russia should receive a very strong message, not only from the United States and from other capitals, but also from Berlin, that this is not the game that will benefit Russia.”

When Blinken was asked about the apparent difference between his assessment and Kuleba’s, he essentially just repeated his earlier remarks.

(Nord Stream 2 AG and its CEO, a close associate of Putin, were among the parties spared by the Biden administration in its waiver decision last May. It cited “national interest,” maintaining that going ahead with those sanctions would have upset relations with Germany, an important ally.)

“Since the Biden administration refused to impose mandatory congressional sanctions on NS2 earlier this year, Russia has cut gas transit through Ukraine and amassed troops and military equipment on the Ukrainian border,” Risch said in a statement. “Putin is also publicly warning European Union leaders to quickly certify NS2 if they want relief from Europe’s worst gas crisis in years.”

“Unsurprisingly, the Biden administration has not imposed any cost on Russia for creating and weaponizing this energy crisis,” he said. “So long as the administration continues to ignore the bipartisan will of Congress, we will continue to push legislation that protects our allies and interests in Europe, while countering the Kremlin’s malign influence projects.”