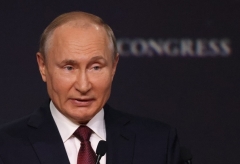 (CNSNews.com) – Russian President Vladimir Putin said Wednesday he takes seriously Ukrainian President Volodymyr Zelensky’s desire for his country to join NATO, and does not dismiss it as “idle talk,” as some commentators in Russia are doing.

In an interview on the Rossiya-24 television channel, Putin recalled that previous eastward expansion of the alliance had taken place despite Moscow’s opposition – even at a time when relations between Russia and the West were cordial.

“I do not want to use harsh words, but they simply spat upon our interests and that’s that,” the TASS state news agency quoted him as saying.

Putin alluded to Russia’s view that the United States had committed, amid the Soviet Union’s disintegration, that NATO would not be enlarged to admit countries formerly in the USSR or the Warsaw Pact.

Nonetheless, the alliance underwent two rounds of expansion into what Russia saw as its “sphere of influence,” with Poland, Hungary and the Czech Republic becoming members in 1999, and Romania, Bulgaria, Estonia, Latvia, Lithuania, Slovenia and Slovakia joining in 2004.

The idea that Ukraine and Georgia, important constituent republics of the former Soviet Union, could follow suit has long been a non-negotiable for Putin. Leery of Russian objections, NATO allies have since 2008 failed to agree on even putting the two aspirants onto a formal path towards accession by granting them “membership action plan” (MAP) status.

At a time of escalated tensions over Russia’s military intervention in Ukraine – including its ongoing occupation of Crimea – the presidency in Kyiv said this week that in a phone conversation Monday with Zelensky, President Biden had highlighted the importance of providing Ukraine with a MAP.

White House officials were a little less specific about that aspect of the conversation, which came ahead of a NATO summit scheduled for Brussels next week, followed by a much-anticipated Biden-Putin meeting in Geneva.

Referring in the interview to Zelensky’s hopes to join NATO, Putin said, “Yes, I know and see comments by our experts, I see the reaction of our media and politicians. Everybody is chuckling a little at Zelensky, saying that it’s all idle talk and nothing will happen there, and so on.”

“I am of a different opinion,” he said, adding that there were no guarantees on the issue.

Putin said the issue of NATO’s expansion towards Russia’s borders was “a matter of paramount significance as far as the security of Russians and Russia goes.”

The previous rounds of enlargement had occurred even when relations between Russia and the West had been relatively good, he said, before the tensions of recent years over Crimea and Ukraine.

“What does that mean?” he asked. “It means that they put their geopolitical interests above the interests of other nations, regardless even of the nature of their relations with those countries.”

Should Ukraine become a NATO member, the time it would take for a NATO missile launched from a Ukrainian base to reach Moscow would drop to under ten minutes, Putin told the network.

He compared such a scenario to Russia deploying missiles “on Canada’s southern border or Mexico’s northern border.”