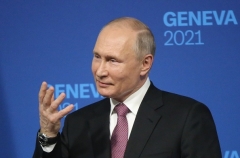 (CNSNews.com) – Russian President Vladimir Putin told a Russian reporter in Geneva on Wednesday night that he had felt “no pressure” from President Biden during their three-hour meeting.

“Before coming to Geneva, Americans were saying, ‘we’re going to exert pressure on Putin,’” the reporter with the Komsomolskaya Pravda daily said during Putin’s lengthy post-summit press conference. “Have you felt this pressure? And how have you stood up to it?”

“No, no pressure at all,” Putin replied, speaking through an interpreter.

“It was a frank and candid conversation, without, you know, without going on a tangent from the set agenda. Like I said, neither us nor the United States have tried to exert any pressure. But this – this was not the point of the meeting.”

Asked about Biden’s often-cited anecdote about having looked into Putin’s eyes – when the two men met in Moscow in 2011 – and not seen a soul, Putin said he had heard the story before, but had no recollection of the original exchange. (Biden told the New Yorker in 2014 that Putin “looked back at me, and he smiled, and he said, ‘We understand one another.’”)

Putin described Biden as “a constructive person, well-balanced and experienced, seasoned politician,” which is what he said he had been expecting.

“He recalled his family, and conversations he had with his mother,” Putin continued, adding that while those topics weren’t relevant to the business they had to discuss, “nevertheless it shows his qualities and his moral values.”

“It doesn’t necessarily mean that we need to look into the eyes and ‘see a soul,’ and to pledge eternal love,” he concluded. “We defend the national interests of our countries and these relationships are always based on pragmatism.”

In his subsequent press conference, Biden agreed when told that Putin had said “no threats” had been issued during the talks.

“There are no threats, just simple assertions made,” Biden said. “And no, ‘well, if you do that, then we’ll do this’ wasn’t anything I said. It was just letting him know where I stood; what I thought we could accomplish together; and what, in fact – if it was – if there were violations of American sovereignty, what would we do.”

‘Putin got what he wanted’

Commenting on the summit shortly after it ended, Russian opposition activist and former world chess champion Garry Kasparov told NBC News, “I’ve been saying all along that Biden didn’t have to be at this meeting in the first place.”

“So the idea of inviting Putin was a mistake. And it gave Putin a platform, Putin got a huge platform.”

Kasparov, chairman of the Human Rights Foundation, said the only good news about the summit was that “it was shorter than expected, so there was not much damage done. But Putin got what he wanted, that’s why he was beaming with joy when he left.”

Bill Browder, head of the Global Magnitsky Justice Campaign and a prominent opponent of Putin, also said the summit should never have been held.

“Putin doesn’t deserve to sit on the same stage as the leader of the free world,” he tweeted.

“I don’t think that there’s going to be any material change is the U.S.-Russia relationship as a result of this summit,” Browder told Bloomberg TV while the meetings were underway. “I think from a long-term perspective all this does is elevate and validate Vladimir Putin, who doesn’t deserve any elevation or validation.”

“He’s been a malign factor, he’s been hacking elections, hacking pipelines, shooting down passenger planes, invading foreign countries, and so he doesn’t really deserve a summit.”

Browder, the U.S.-born founder of Hermitage Capital, began lobbying for international action against Russia after his lawyer and friend Sergei Magnitsky was tortured and died in Russian custody in 2009.

The efforts bore fruit with the passage in the U.S. of the 2012 Magnitsky Act, legislation targeting Russian rights violators with sanctions. Similar legislation has since been enacted in more than half a dozen other Western countries.

In a CBS News/YouGov poll published on Tuesday, 58 percent respondents said they wanted Biden to be tough with Putin, while 42 percent favored a “cooperative approach.”