A pre-recorded speech by Iranian President Ebrahim Raisi is screened at the U.N. General Assembly in New York on Tuesday. (Photo by Timothy A. Clary/ Pool /AFP via Getty Images)

(CNSNews.com) – After Iran’s U.S.-sanctioned president Tuesday used his first speech to the U.N. – pre-recorded and delivered by video link – to slam and ridicule the United States, White House press secretary Jen Psaki said “the door remains open to diplomacy” and ascribed his rhetoric to domestic political considerations in Iran.

“As it relates to rhetoric from leadership, they have their own politics and I’ll leave it at that,” Psaki told reporters on Air Force One as President Biden returned to Washington from New York City after addressing the world body.

In his speech, President Ebrahim Raisi questioned the credibility of U.S. leadership at home and abroad, citing the January 6 breach of the U.S. Capitol and the chaotic end to the U.S. military presence in Afghanistan – specifically the gruesome deaths of several Afghans as they sought to escape Taliban rule.

“This year, two scenes made history,” he said through an interpreter. “One was on January 6 when the U.S. Congress was attacked by the people and, two, when the people of Afghanistan were dropped down from the U.S. planes in August,” he said.

“From the Capitol to Kabul, one clear message was sent to the world: The United States’ hegemonic system has no credibility, whether inside or outside the country.”

“What is seen in our region today proves that not only the hegemonist and the idea of hegemony, but also the project of imposing Westernized identity have failed miserably,” Raisi said. “The result of seeking hegemony has been blood-spilling and instability and, ultimately, defeat and escape.”

In further comments aimed at the United States, Raisi said the U.S. had been “expelled” from Afghanistan and suggested the same would happen in Iraq.

And he mocked slogans associated both with Biden and his predecessor.

“Today, the world doesn’t care about ‘America First’ or ‘America is Back,’” he said. “If rationality prevails in the minds of the decision-makers, they have to realize that nations’ perseverance is stronger than the power of the superpowers.”

Raisi also condemned U.S. sanctions – which were restored after President Trump withdrew from the Joint Comprehensive Plan of Action (JCPOA) nuclear deal in 2018 – describing them as crimes against humanity.

“The United States mistakenly believed it would render us desperate and devastated, but our perseverance has yielded results and will always do, for the smart and dynamic resistance of the Islamic Republic of Iran comes from our strategic rationality,” he said. “And we don’t trust the promises made by the U.S. government.” 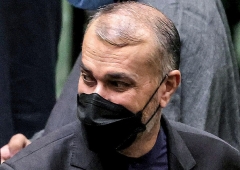 Shift in US stance towards regime representatives in New York

Raisi, Iran’s former judiciary chief, was elected president in a June election with a historically low turnout, after a campaign in which the regime barred hundreds of aspiring candidates from running.

A close ally of supreme leader Ayatollah Ali Khamenei, he is accused of gross human rights violations during his decades-long career, including a key role in the extrajudicial executions of thousands of dissidents in 1988.

Citing those abuses and others, the U.S. Treasury Department designated him for sanctions in 2019.

A group of Republican senators last July urged the Biden administration to refuse him a visa to attend the General Assembly high-level session, although Raisi in the end chose not to attend in person, a departure from his predecessors.

In 2019 the Trump administration imposed restrictions on the movement of Iranian representatives in New York, which applied too to Amirabdollahian’s predecessor, Javad Zarif.

But the Biden administration is seeking a return to the JCPOA, and last February it announced it was lifting the regulations applying to Iranian diplomats at the U.N., describing them as “unnecessary obstacles to multilateral diplomacy.”

Amirabdollahian has been holding back-to-back meetings with foreign counterparts. He said on Twitter he has around 50 meetings and events planned in New York.

Asked about the status of talks in Vienna – stalled since before the Iranian election – on reviving the JCPOA, Psaki said on Tuesday, “the door remains open to diplomacy.”

‘Obviously, they had their own political election, as you all know, that happened in Iran,” she said. “And our negotiating team has always conveyed that the best path forward is to pursue those negotiations, to have those conversations and see if we can return to the table.”

In his speech, Biden said his administration was working with partners “to engage Iran diplomatically and seek a return to the JCPOA. “We’re prepared to return to full compliance if Iran does the same.”

For the U.S., compliance entails lifting the nuclear-related sanctions which Trump restored are leaving the deal. For Iran, compliance means returning to the restrictions on its nuclear activities that it committed to under the JCPOA, but which it jettisoned after Trump’s withdrawal.