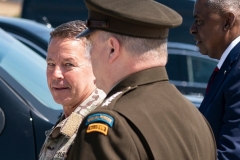 After stepping down as commander of U.S. forces in Afghanistan in mid-July, U.S. Army Gen. Scott Miller is greeted at Andrews Air Force Base, Md. by Defense Secretary Gen. Lloyd Austin and chairman of the Joint Chiefs of Staff Gen. Mark Milley. (Photo by Alex Brandon/ Pool/AFP via Getty Images)

(CNSNews.com) – White House Press Secretary Jen Psaki on Thursday declined to comment on the disclosure that Gen. Scott Miller, then the U.S. commander in Afghanistan, advised against a total withdrawal of troops from the country, saying only that President Biden “was provided a range of advice.”

She also doubled down on Biden’s assertion that keeping a small number of troops there was not a viable option. She said it was an either-or situation – either increase the troop level or withdraw them.

Following a classified briefing this week with Miller, who stepped down as commander of U.S. and NATO forces in Afghanistan in mid-July, Senate Armed Services Committee ranking member Sen. Jim Inhofe (R-Okla.) said Miller had agreed to Inhofe divulging Miller’s advice to his superiors.

Inhofe said Miller had given his advice --“that he had been opposed to the total withdrawal” -- to Defense Secretary Gen. Lloyd Austin, Chairman of the Joint Chiefs of Staff Gen. Mark Milley, and U.S. Central Command Commander Marine Gen. Kenneth McKenzie – not to Biden directly, as the president was not there at the time.

“We heard enough to know that there are inconsistencies between what the administration has said and the truth,” he told reporters. “Clearly President Biden didn’t listen to all the military advice.”

“President Biden told the American people that it ‘wasn’t true’ his top military advisers warned against withdrawal,” Inhofe tweeted later. “But yesterday, General Miller told us plainly that’s exactly what he did.”

During Thursday’s White House briefing, a reporter recalled that Biden told ABC News in August that “none of his advisers recommended leaving 2,500 troops in Afghanistan.”

“General Miller told the Senate Armed Services Committee that that was exactly what he recommended,” the reporter continued. “Was the president’s answer in that interview an honest answer?”

Psaki declined to discuss “details of private advice that the president gets from his national security team or military advisers,” but said Biden “welcomed candid, non-sugar-coated advice.”

Asked again whether Biden had specifically heard “the recommendation from the commander on the ground in Afghanistan that he feared that a full withdrawal would be devastating and should not happen,” Psaki replied, “He was provided a range of advice.  I'm not going to get into more details than that.”

“And the president has been clear many times, he was not going to send thousands and thousands more troops to fight a war the Afghans did not want to fight themselves.”

Secretary of State Antony Blinken this week testified on the chaotic Afghanistan withdrawal before the House Foreign Affairs Committee and Senate Foreign Relations Committee but lawmakers have yet to hear from Austin and top military brass.

Austin, Milley, and McKenzie are now scheduled to appear before the Senate Armed Services Committee in an open hearing on September 28, and Inhofe said he was now “even more eager” to hear from them.

“I’ve got a lot more questions for the Biden administration – they better have a lot of answers.”

Inhofe described the hearings as “just a start of an open, exhaustive, transparent process,” and said he also hoped to have Miller back to testify again soon, this time in an open hearing.

“The president was given advice and counsel, not just from this building but from other agencies across the government, to help him formulate what ended up being his opinion and his decision,” he said. “A very normal process was had.”

Austin also commented briefly about the process, telling reporters at the State Department on Thursday, “we followed a rigorous process where commanders and other players in the NSC establishment were able to provide their inputs, and with those inputs the president made his decision.”

Miller, a U.S. Army four-star general, led Joint Special Operations Command before being appointed in 2018 as the last – and longest-serving – commander of U.S. forces in Afghanistan and the NATO-led Resolute Support Mission.

He held that post until July 12, when command of the remaining troops was passed on to McKenzie, as the drawdown ordered by Biden neared its completion.