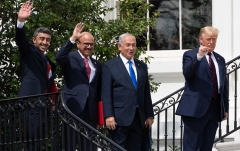 She dismissed initiatives whose crowning achievement was the securing of four normalization agreements between Israel and Arab nations in less than four months.

“Aside from putting forward a peace proposal that was dead on arrival, we don’t think they did anything constructive, really, to bring an end to the longstanding conflict in the Middle East,” Psaki told reporters on Air Force One accompanying President Biden to Michigan.

Speaking off-camera, she also criticized the Trump administration for stopping assistance to the Palestinian Authority in 2018, and noted that Biden had reinstated it.

Psaki’s dismissive comments about the Trump administration’s efforts in the region stand in contrast to generally positive reactions by the Biden team to those initiatives, which produced a historic series of recognition agreements between Israel and Arab states.

Her remark about “a peace proposal that was dead on arrival” referred to a Trump initiative that envisaged Israel retaining sovereignty over blocs of Israeli cities and towns built on disputed territory; a demilitarized Palestinian state including parts of eastern Jerusalem, where its capital would be located; and an extensive economic plan for the Palestinians, to underpin the political agreement to end the conflict.

After the P.A. rejected those proposals out of hand, diplomatic efforts moved to securing the Israeli-Arab normalization accords.

Psaki was responding to a question by a reporter who suggested that “the thinking behind” the normalization agreements was, “forget the Palestinians, they’re not a problem. We’re just going to move on.”

In fact, the thinking behind the agreements, according to those who brokered them, was that the U.S. should not allow the recurring deadlocks in Israeli-Palestinian negotiations to prevent progress in the broader region.

Then-White House senior advisor Jared Kushner described it as breaking with “the failed conventional thinking of the past.”

The Saudi-led “Arab Peace Initiative” of 2002 made Arab recognition of Israel conditional on resolution of the Palestinian demands for a state – specifically, “full Israeli withdrawal from all the territories occupied since 1967.”

Israeli leaders characterized that as giving the recalcitrant Palestinian leadership a “veto” on any attempt by Israel to normalize relationships in the Arab world.

Bypassing that blockage, the Trump administration won agreement by Bahrain, the United Arab Emirates, Sudan, and Morocco to recognize and establish diplomatic relations with Israel.

The four agreements were the first of their kind since Jordan in 1994 and Egypt in 1979 signed peace deals with Israel.

Netanyahu predicted that when the Palestinian leadership realizes it no longer has a “veto,” it would be “hard pressed to remain outside the community of peace.”

The P.A. reacted angrily to the agreements, calling them “a stab in the back of the Palestinian people.”

Kushner wrote in a Wall Street Journal op-ed in March, “One of the reasons the Arab-Israeli conflict persisted for so long was the myth that it could be solved only after Israel and the Palestinians resolved their differences.”

Since the recent outbreak of hostilities between Israel and Hamas and other terrorist groups in Gaza, Trump critics have made snide remarks about the “failure” of the Trump efforts.

“The one positive thing to come out of the Trump administration was Kushner’s brilliance in bringing peace to the Middle East, liberal filmmaker Rob Reiner tweeted this week, one of many sarcastic digs on social media skewering “Kushner’s peace plan.”

The visible improvement of relations between Israel and the Arab world was welcomed at the time by then-Democratic presidential nominee Biden, even as he sought to give the Obama-Biden administration credit for the achievement.

Senior officials in the Biden administration have also referred to the agreements in positive terms, with both Secretary of State Antony Blinken and National Security Advisor Jake Sullivan expressing hope in January that the incoming administration could build on them.

Blinken told reporters the administration thinks “that Israel normalizing relations with its neighbors, and other countries in the region, is a very positive development, and so we applauded them, and we hope that there may be an opportunity to build on them in the months and years ahead.”

Kushner: Trump’s Mideast Approach Is One of ‘Future Thinking,’ Not ‘Failed Conventional Thinking of The Past’ (Aug. 17, 2020)