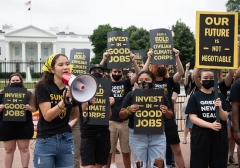 Sunrise Movement climate activists protest in front of the White House in June. (Photo by Saul Loeb/AFP via Getty Images)

(CNSNews.com) – As progressives prepare for a “voting rights” rally in Washington on Saturday, a youth-led climate advocacy group has sparked a kerfuffle by declaring it will not take a speaking slot at the event because of the participation of “Zionist” groups.

The D.C. affiliate of the Sunrise Movement complained that the Jewish Council for Public Affairs (JCPA), the National Council of Jewish Women (NCJW), and the Religious Action Center of Reform Judaism (RAC) were “in alignment with and in support of Zionism and the State of Israel.”

“Given our commitment to racial justice, self-governance, and indigenous sovereignty, we oppose Zionism and any state that enforces its ideology,” the group said in a statement.

(Notwithstanding the group’s reference to “indigenous sovereignty,” Jewish heritage in Israel dates back millennia. The Jewish King David reigned in Jerusalem some 3,000 years ago, while Abraham, the patriarch of Judaism who according to the Bible was called by God to settle in Canaan, is believed to have done so almost 1,000 years earlier.)

Saturday’s planned rally marks the culmination of a “relay” from Harper’s Ferry, West Virginia to the nation’s capital in support of the Freedom to Vote Act, which the U.S. Senate failed to move forward on Wednesday night.

The “Freedom to Vote Relay – Rally at the Finish Line” event is being organized by the Declaration for American Democracy, a coalition of more than 230 progressive groups, including the JCPA, NCJW and RAC.

The D.C. Sunrise Movement urged the Declaration for American Democracy to “consider removing” the three Jewish groups from its list of members, “as Zionism is incompatible with statehood and political sovereignty.”

“We will continue to fight for statehood in D.C. in the United States and for the liberation of Palestine, and ask that coalitions inviting us in the future keep this in mind,” it said. “We encourage coalitions to vet organizations to ensure that potential members’ work aligns with the mission of the coalition as a whole.”

“As an organization committed to social justice and our progressive Zionist values, we will continue to work toward the passage of comprehensive voting rights legislation,” it said.

Similarly restrained reaction came from NCJW chief executive officer Sheila Katz, who said in part that the council “works for the safety and well-being of Americans, Israelis, and Palestinians.”

“Our commitment to working across lines of difference includes our willingness to engage in dialogue with groups that take issue with our policies,” she said. “Let’s move forward together to advance human rights and dignity for all people.”

Reaction from other Jewish organizations was more direct.

“Zionism is the movement for Jewish self-determination in Israel,” said the American Jewish Committee. “Anti-Zionism is considered anti-Semitic by over 80% of American Jews. To shun Zionists is to shun the overwhelming majority of Jews.”

“This is the vilification of Jewish nationhood and a litmus test for all who support it,” said Anti-Defamation League chief executive officer Jonathan Greenblatt. He added that the three targeted organizations “all provide invaluable services and support to the Jewish community, and vilifying them is nothing short of disgraceful.”

“Targeting Jewish Americans in is such an open and blatant way is a shameful attempt to bar Jews from participating in civic spaces,” said the Jewish Democratic Council of America, describing the action as “antisemitism, plain and simple.”

Rep. Jerrold Nadler (D-N.Y.), whose congressional district has the second-largest number of Jewish voters of any in the country, called the Sunrise Movement’s stance “misguided, unproductive, offensive and wrong.”

While focused on climate, the Sunrise Movement also describes itself as “anti-racist, anti-capitalist, and anti-imperialist.”

“We center, support, uplift, and protect Black, indigenous, POC, femmes, queer, trans, disabled, unhoused folx, and all other marginalized groups,” the group says. “We learn and grow from their experiences, knowledge, and practices that will ultimately lead us to liberation.”

Over the summer, the Sunrise Movement was one of several dozen signatories to a letter to President Biden and congressional Democrats complaining that the “escalating, bipartisan anti-China rhetoric in both Congress and the White House damages the diplomatic and political relationships needed to move forward boldly and cooperatively” on tackling “the existential threat that is the climate crisis.”

“Nothing less than the future of our planet depends on ending the new Cold War between the United States and China,” said the letter, which was silent on issues that are fueling bilateral tensions, including U.S. criticism of the Chinese Communist Party’s mass-scale abuses against minority Muslims and stifling of democracy in Hong Kong.