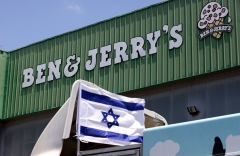 An Israeli flag waves on the cab of a delivery truck outside the factory of the U.S. ice-cream maker Ben & Jerry's in Beer Tuvia, Israel. (Photo by Emmanuel Dunand/AFP via Getty Images)

(CNSNews.com) – As pushback continues against Ben & Jerry’s decision to stop sales in the territories disputed between Israel and the Palestinians, Florida Gov. Ron DeSantis on Thursday set in motion a process that could result in the state being prohibited from buying any assets in the ice cream maker’s British-based parent company.

In Texas, meanwhile, the state comptroller of public accounts announced he has instructed his staff to determine if the actions by Ben & Jerry’s and its owner, the consumer goods conglomerate Unilever, would require a bar on the Lone Star State entering into contracts with them.

Comptroller Glenn Hegar also used the opportunity to make a plug for a Texas-based ice cream company, while taking a swipe at Ben & Jerry’s.

“I would also note that Texans have better options for a sweet treat this summer,” he said in a statement. “Blue Bell was founded in Brenham, Texas, and, for my money, tastes much better than the stuck-up stuff made by a foreign-owned company started in Vermont.”

Although the boycott decision relates to the disputed territories – Ben & Jerry’s says it will continue operating elsewhere in Israel – Hegar pointed out that the relevant statute applies to “Israeli-controlled territory.”

“Texas Government Code Chapter 808 defines ‘boycott Israel’ as ‘refusing to deal with, terminating business activities with, or otherwise taking any action that is intended to penalize, inflict economic harm on or limit commercial relations specifically with Israel or with a person or entity doing business in Israel or an Israeli-controlled territory.’”

If actions taken by Ben & Jerry’s or Unilever are found to trigger their listing under the statute, then state governmental entities will be required to divest, in line with a prescribed timetable.

“Texans have made it very clear that they stand with Israel and its people,” Hegar said. “We oppose actions that could undermine Israel's economy and its people.”

In Florida, DeSantis wrote to the State Board of Administration (SBA), asking it to initiate a process to place “Ben & Jerry’s, and by extension Unilever,” on a list of “scrutinized companies” that boycott Israel.

As with the Texas statute, Florida’s statutes apply to boycotts or other actions that limit commercial relations with Israel or Israeli-controlled territories, drawing no distinction between the two. The SBA is prohibited from acquiring direct holdings of listed companies.

“Should the State Board of Administration affirmatively place Unilever and its corporate entities on the Scrutinized Companies List and these companies do not cease the boycott of Israel as required by Florida law, the Board must refrain from acquiring any and all Unilever assets consistent with the law,” DeSantis wrote to SBA executive director Ash Williams.

He noted pointedly that Florida “holds multiple investments” in Unilever.

“These actions affirm the State of Florida’s relationship with the State of Israel and our commitment to a swift response to those who discriminate against the Israeli people,” DeSantis said.

Ben & Jerry’s said in a statement on Monday that it believes selling its ice cream in “the Occupied Palestinian Territory” was inconsistent with its values.

“We also hear and recognize the concerns shared with us by our fans and trusted partners.”

The company said it had informed its licensee who makes the ice cream in Israel and distributes it in the region “that we will not renew the license agreement when it expires at the end of next year.”

It also said it would continue to operate in Israel.

The Conference of Presidents of Major American Jewish Organizations said it was “deeply disappointed” in the decision and encouraged Unilever “to recognize that boycotts of Israel are discriminatory and further inflame the Israeli-Palestinian conflict” and to “override the decision of its subsidiary.”

The conference represents 50 national Jewish organizations on issues of national and international concern. A liberal Jewish group that is not among them, J Street, took a different stance, calling Ben & Jerry’s decision “principled.”

“J Street and I oppose the Global BDS [boycott, divestment and sanction movement] Movement, which doesn’t recognize the state of Israel or the Jewish people’s right to a national homeland,” J Street president Jeremy Ben Ami wrote in an email to supporters. “But when a company says it will do business in Israel -- that’s not a boycott of Israel.”

“Ben & Jerry’s decision is a legitimate, peaceful protest against the systemic injustice of occupation and a reminder that the settlements are, in fact, illegal under international law.”

Israeli Foreign Minister Yair Lapid in response to the announcement urged those U.S. states that have passed anti-BDS measures to enforce them against the ice cream manufacturer.

At least 35 states have passed legislation or enacted executive measures designed to discourage BDS, an anti-Israel campaign which critics call anti-Semitic on the grounds it has only one target – the Jewish state – but disregards numerous other territorial disputes around the world, such as Kashmir, Northern Cyprus, Tibet, and Western Sahara.