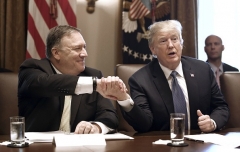 Secretary of State Mike Pompeo and President Trump during a 2018 cabinet meeting. (Photo by Olivier Douliery/AFP via Getty Images)

(CNSNews.com) – Controversy erupted Tuesday after Secretary of State Mike Pompeo said – with a smile – that “there will be a smooth transition to a second Trump administration.”

But moments later, he indicated that the world should have confidence that the State Department will be “functional” and “successful” with whomever is president at one minute after noon on January 20.

Briefing reporters at the department, Pompeo had just given a lengthy rundown of recent and ongoing diplomatic work around the world, from coalition-building relating to religious freedom, 5G networks, energy supply chains, and counter-terrorism, to sanctions targeting Iranian, Chinese and Assad regime officials.

He seemed bemused that most of the questions asked after his remarks related not to those matters but to the dispute over the U.S. election and the transitional period.

“Is the State Department currently preparing to engage with the Biden transition team?” asked Fox News’s Rich Edson. “And if not, at what point does a delay hamper a smooth transition or pose a risk to national security?”

“There will be a smooth transition to a second Trump administration,” Pompeo deadpanned, then broke into a smile. “Right,” he continued. “We’re ready. The world is watching what’s taking place here.

“We’re going to count all the votes, when the process is complete, there’ll be electors selected. There’s a process; the Constitution lays it out pretty clearly. The world should have every confidence that the transition necessary to make sure that the State Department is functional today, successful today, and successful with the president who’s in office on January 20th, a minute after noon, will also be successful.”

Former ambassador to the U.N. Samantha Rice – sometimes mentioned as a possible outsider for secretary of state in a Biden administration – called it “incredibly reckless, dangerous, and damaging to U.S. security.”

“The State Department would normally be putting out statements condemning comments like this from foreign officials whose party lost elections,” commented former Obama national security council member Ben Rhodes, in a tweet forwarded by Susan Rice, former ambassador to the U.N. and national security advisor, considered a strong contender for the top State Department post in a Biden administration.

“Secretary Pompeo, Joe Biden has won,” Senate Minority Leader Chuck Schumer said at a press briefing. “He’s won the election. Now move on. Let’s bring this country together and get things done. We have a COVID crisis raging. We don’t have time for these kinds of games.”

NBC’s Joe Scarborough seemed inclined to give Pompeo at least some measure of the benefit of the doubt, encouraging people to watch all of the statement, then adding, “After starting with a very unfortunate attempt at humor, he lays out the legal process for all American elections: count the votes, let courts field legal challenges, declare a winner.”

Fox News’ Bret Baier asked Pompeo later whether he was being serious with his “second Trump administration” remark.

“We’ll have a smooth transition, and we’ll see what the people ultimately decided when all the votes have been cast,” Pompeo replied. “We have a process, Bret, the Constitution lays out how electors vote. It’s a very detailed process laid out. We need to comply with all of that.”

“And then I am very confident that we will have a good transition, that we will make sure that whoever is in office on noon on January 20th has all the tools readily available, so that we don’t skip a beat with the capacity to keep Americans safe.”

In another interview on Tuesday evening, Pompeo told Family Research Council president Tony Perkins on his national radio show “Washington Watch” that Americans should be confident that there will be a “full, capable transition” on January 20, “whether it’s to a Trump administration – a second Trump administration as I spoke about today – or to an administration led by former Vice President Biden.”

“The American people understand that our transition will be complete and thorough and that if we spend a few more days validating that we have this process right, ensuring that we’ve protected every American’s lawful right to vote, it’s the right thing to do,” he said. “And we need not worry that there won’t be an adequate time for transition, which was frankly what the question was suggesting.”

When asked by reporters in Delaware about the remarks, Biden himself seemed to find the remarks amusing, laughing at the mention of Pompeo’s name.

He called Trump’s refusal to concede an “embarrassment.”