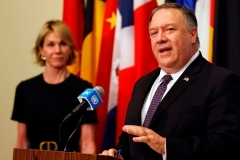 Secretary of State Mike Pompeo, flanked by U.S. Ambassador to the U.N. Kelly Craft, speaks at the U.N. on Thursday on the Iran sanctions ‘snapback’ initiative. (Photo by Mike Segar/Pool/AFP via Getty Images)

(CNSNews.com) – As Secretary of State Mike Pompeo on Thursday kick-started the process to restore almost all sanctions on Iran in one month’s time, he had blunt words for European allies who are rejecting the right of the U.S. to take the step, accusing them of choosing to “side with the ayatollahs.”

Pompeo was speaking in New York, after lodging with the U.N. a 30-day notice for U.N. sanctions against the Iranian regime, lifted under the 2015 nuclear deal, to “snap back.”

The U.S. took the step after a failed attempt last week to extend the embargo on the sale of conventional arms to Iran, due to expire on October 18.

“Our friends in Germany, France and the United Kingdom – the E3 – all told me privately that they don’t want the arms embargo lifted either,” he told reporters at U.N. headquarters. “And yet today, in the end, they’ve provided no alternatives, no options.”

“No country but the United States has had the courage and the conviction to put forward a resolution,” he said. “Instead they chose to side with the ayatollahs.”

“Their actions endanger the people of Iraq, of Yemen, Lebanon, Syria, and indeed their own citizens as well,” Pompeo added, listing regional countries where Iran is accused of destabilizing activities including support for violent proxies. (He also cited Iranian terror and assassination plots on European soil.)

The drafters of the Obama-era nuclear deal, the Joint Comprehensive Plan of Action (JCPOA), set a five-year limit on the arms embargo, which had originally been put in place in 2007.

Given Iran’s malign regional actions, the U.S. has been working “for almost two years” on extending the embargo beyond Oct. 2020, Pompeo said.

But when it brought a resolution to do that before the Security Council last week, only one of the 15 members, the Dominican Republic, joined the U.S. in voting in favor. Russia and China voted “no,” and the other 11 members, including the E3, abstained.

Having failed to renew the embargo, the Trump administration then took the snap back route.

Restoring the sanctions will not only have the effect of extending the arms embargo indefinitely, it will also once again apply restrictions on Iran’s ballistic missile activity.

“I’m pleased to say, too, that these restored sanctions will also reimpose accountability for other forms of Iranian malign activity that the authors of the nuclear deal foolishly downplayed,” Pompeo said. “Iran will again be prohibited from ballistic missile testing.”

During the negotiations that produced the JCPOA, the Iranian regime insisted, with Russian and Chinese backing, that its missiles be off the table. The Obama administration acceded, contending that second-order issues like missiles and Iran’s support for terrorism could not be allowed to get in the way of tackling the number one priority – the suspected nuclear weapons program.

“The United States will never allow the world’s largest state sponsor of terrorism to freely buy and sell planes, tanks, missiles and other kinds of conventional weapons,” Pompeo said.

The step he took on Thursday has sparked a legal wrangle, as the other parties to the JCPOA all dispute the right of the U.S. to initiate sanctions snapback, having itself withdrawn from the deal two years ago.

Russian ambassador to the U.N. Vassily Nebenzia told reporters that what the U.S. was trying to do was “invalid and illegal.”

“We will distribute our legal position on the matter where will clearly express what are the deficiencies of this [U.S.] position,” he said. “We believe these arguments are not valid, and we will provide our arguments why this is so.”

The snapback procedure is contained in Security Council resolution 2231, the 2015 measure that enshrined the JCPOA. Pompeo argued that the fact the U.S. withdrew from the JCPOA – not a treaty, but a political agreement among political leaders – is immaterial.

UNSC resolutions are legally binding, and resolution 2231 allows any of the six “participant” countries – the U.S., Britain, France, Russia, China and Germany – to initiate snapback, “unconditionally.”

“It says this set of states has the right to execute snapback,” he said. “There – it’s not conditioned on any other activity, it doesn’t require compliance. It just says these countries can execute snapback.”

It’s not just the Russians and Chinese holding that position, however. The foreign ministers of Germany, France and Britain are doing so too.

“The U.S. ceased to be a participant to the JCPOA following their withdrawal from the deal on 8 May, 2018,” they said in a statement Thursday. As a result, “we cannot therefore support this action [by the U.S.], which is incompatible with our current efforts to support the JCPOA.”

“We call on all UNSC members to refrain from any action that would only deepen divisions in the Security Council or that would have serious adverse consequences on its work,” the three European ministers added.

Nonetheless, Pompeo said the U.S. expects the sanctions to be restored in a month’s time, and “we expect every U.N. member to comply with their obligations.”

Once the sanction are back in place, he said, the U.S. “will vigorously enforce them.”

And he expressed the hope that the restoration of sanctions will pressure the regime to return to the negotiating table.

“We call on the international community to join us in crafting a stronger deal, that addresses the full range of Iran’s malign behavior.”