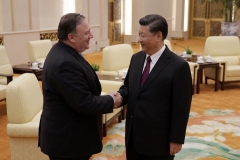 (CNSNews.com) – Escalating a seething row with Beijing, Secretary of State Mike Pompeo said Sunday the U.S. has “enormous evidence” that the novel coronavirus wreaking havoc across the world began in a laboratory in Wuhan, and slammed China for its continued refusal to provide access to the site to Western experts.

Asked on ABC’s “This Week” if he thought the virus had escaped as the result of a lab accident, or had been deliberately released, Pompeo demurred, but pressed again for China to open the facility to outside experts, in order to help provide the answers to such questions.

Chinese officials and state media have been angrily criticizing Pompeo over his accusations about China’s handling of the outbreak, accusing the Trump administration of blaming China to deflect criticism of its own response at home.

Last week the Office of the Director of National Intelligence issued a rare statement, saying it was continuing investigations into whether the coronavirus outbreak “began through contact with infected animals or if it was the result of an accident at a laboratory in Wuhan.”

And in response to one of the more dubious conspiracy theories circulating, it said the intelligence community “concurs with the wide scientific consensus that the COVID-19 virus was not manmade or genetically modified.”

ABC’s Martha Raddatz asked Pompeo if he had seen anything that gave him “high confidence” that the virus originated in a Wuhan lab.

“There is enormous evidence that that’s where this began,” he said. “Remember, China has a history of infecting the world and they have a history of running substandard laboratories. These are not the first times that we’ve had a world exposed to viruses as a result of failures in a Chinese lab.”

“And so while the intelligence community continues to do its work, they should continue to do that and verify so that we are certain, I can tell you that there is a significant amount of evidence that this came from that laboratory in Wuhan.”

Raddatz asked Pompeo whether he thought the virus had been “intentionally” or accidentally released.

The Wuhan Institute of Virology in Wuhan is China’s specialist lab studying pathogens including bat and human coronaviruses. (Photo by Hector Retamal/AFP via Getty Images)

Two labs and a market

Beijing has repeatedly denied U.S. accusations about its mishandling of the outbreak, even disputing that the virus necessarily originated from Wuhan. But while it says the origin is a matter for scientific inquiry, it has not allowed outside experts to visit.

In the epicenter city of Wuhan, attention has fallen onto three locations – the Huanan Seafood Wholesale Market, the Wuhan Center for Disease Control (WHCDC) a few hundred yards from the market, and the Wuhan Institute of Virology (WIV) about nine miles away.

The market, where wild animals were among those being sold, was an early suspect in the hunt for an origin, as many of the early cases in Wuhan were linked to it. It was shut down by local authorities on January 1.

But an expert study in late January found that 13 of the first 41 people diagnosed had no contact whatsoever to the market, raising speculation that it may have been an outbreak  accelerator, but not necessarily the origin.

In February, two Chinese scientists posted a paper concluding that the coronavirus “probably originated” from bats being kept for research at the nearby WHCDC lab. They called for a tightening of safety procedures, and raised the possibility of both labs being relocated “far away from city center and other densely populated places.”

The study was later removed from an online research hub, although archived copies are still accessible.

Wuhan’s other lab, WIV, is the country’s specialist lab studying bat and human coronaviruses, including those mapped after collection from horseshoe bat feces taken from a cave in China’s Yunnan province.

Pompeo has been raising concerns about Chinese lab safety levels.

“There are multiple labs inside of China and our understanding of what takes place there is pretty limited, and there have been examples of leaks from those labs before,” he said in a radio interview on Friday.

In another radio interview a day earlier, Pompeo stressed the importance of access in Wuhan.

“I’m very confident that if we are permitted to have access to the information, locations, and all the data we need collectively – not just the United States, but scientists from Europe and from Japan and from Australia, world’s leading scientists – we can figure this thing out and we can reduce the risk that something like this would ever happen again.”

Asked about Pompeo’s remarks about the lack of access to the Wuhan labs, Chinese foreign ministry spokesman Geng Shuang at a press briefing did not give a direct response as to why such access has not been permitted.

Instead he quoted a WIV researcher as saying that the lab follows biosafety procedures strictly.

Geng then repeated Beijing’s line about the need for scientists to establish the origins of the outbreak.

“I’d like to emphasize that tracing the origin of the virus is a complex matter of science, which should be studied by scientists and professionals,” Geng said. “We urge American politicians to stop shifting the blame to China and diverting the attention of the international community.”