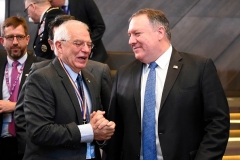 (CNSNews.com) – The United States has agreed to establish with the European Union “a new mechanism for discussing the concerns we have about the threat China poses to the West and our shared democratic ideals,” Secretary of State Mike Pompeo announced on Thursday.

The move is significant, as the Trump administration has been seeking to counter a perception – one that Beijing works hard to encourage – that deep tensions over a range of sensitive issues are a bilateral affair, arising from U.S. hostility.

Pompeo told an event hosted by the German Marshall Fund that China is getting the message – that “this isn’t the United States confronting China, that the world is now confronting China.” In that vein he pointed too to the recent G7 foreign ministers’ statement condemning Beijing’s bid to impose a national security law on Hong Kong.

Speaking by video link, Pompeo said he hopes to travel to Europe soon for talks with E.U. foreign policy chief Josep Borrell on setting up the U.S.-E.U. Dialogue on China.

He said both the U.S. and Europe had been slow to recognize the reality of a “rising authoritarian regime and the implications it had for us here to our free society,” but that a “transatlantic awakening” about the threat posed by the Chinese Communist Party had been “accelerated” as a result of “the CCP’s cover-up of the coronavirus” outbreak.

Exactly how the proposed dialogue will operate has yet to be worked out, Pompeo said, but expressed confidence about setting up “a structure that will enhance our collective shared knowledge, and our collective responses, to ensuring that we protect freedom for every democracy on both sides of the Atlantic.”

He acknowledged challenges ahead, including the risk of getting bogged down in bureaucracy, and that of dealing with 27 E.U. member-states, not all of which will be on the same page.

“Not everybody in the E.U. will share – there’ll be two dozen different views, right? This is true on many issues,” he said.

“But I believe that by doing this we can form a collective judgment and find a set of places where there is significant overlap, and then begin to execute the correct responses the same way the transatlantic alliance has always preserved democracy and freedom.”

The trading relationship with China is vitally important to both the U.S. and the E.U., a point raised during the discussion between Pompeo and the forum moderator, Bojan Pancevski of The Wall Street Journal.

“It’s tempting for many, particularly in our business communities, who make money in China to say we must calm tensions and simply accept an increasingly belligerent CCP,” Pompeo said. “I don’t accept that argument. There is no compromise between freedom and authoritarianism.”

Pancevski pointed out that “China is responsible for much of the growth in the European Union, especially for its biggest economy, Germany.”

(The E.U. was China’s biggest trading partner last year, and China was the E.U.’s second largest, after the U.S.)

Pompeo noted that that U.S. also has an important trade relationship with China, but rejected the notion of a choice between doing business and opposing wrongdoing.

He argued that China needs markets too, and that there were areas of shared interests.

“We haven’t said, ‘Hey, we’re not going to do business with you.’ We’ve said, ‘Stop stealing our intellectual property.’”

Pompeo addressed the forum three days after an annual E.U.-China summit, held via teleconference this year.

In a statement after the broad-ranging discussions, European Commission president Ursula von der Leyen said the coronavirus pandemic and other major challenges made it clear that “the E.U.-China partnership is crucial, be it in terms of trade, climate, technology, and the defense of multilateralism.”

“But for our relations to develop further, they must become more rules-based and reciprocal, in order to achieve a real level playing-field.”