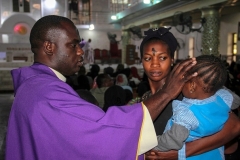 An Ash Wednesday service in Maiduguri, capital of the predominantly Muslim Borno state in northern Nigeria. (Photo by Audu Marte/AFP via Getty Images)

(CNSNews.com) – Rolling out the Trump administration’s final annual list of particularly egregious religious freedom violators, Secretary of State Mike Pompeo on Monday designated Nigeria for the first time as a “country of particular concern” (CPC), while announcing that two other previously-designated countries – Sudan and Uzbekistan – have now been removed from a second-tier “special watchlist.”

Nigeria, Africa’s most populous country and one riven by tensions between Muslims and Christians, is the first officially secular democracy to be blacklisted under the International Religious Freedom Act (IRFA), Until now, every country designated as a CPC over the years since the 1998 law established the process has been an autocracy, Islamic, communist, or military-ruled.

Pompeo’s announcement takes to ten the number of CPCs – countries determined under the IRFA to engage in or tolerate “systematic, ongoing, egregious violations of religious freedom.”

In addition, the special watch list (SWL) – countries whose records are troubling but determined not to meet the statutory criteria for CPC designation – now comprises four countries which were also listed last year: Russia, Cuba, Nicaragua, and the Comoros.

Sudan and Uzbekistan were moved off the SWL, a decision which Pompeo attributed to “significant, concrete progress undertaken by their respective governments over the past year.”

“And yet our work is far from complete,” he said. “The United States will continue to work tirelessly to end religiously-motivated abuses and persecution around the world, and to help ensure that each person, everywhere, at all times, has the right to live according to the dictates of conscience.”

“Nigeria is the first secular democracy that has been named a CPC, which demonstrates that we must be vigilant that all forms of governments respect religious freedom,” she said.

Vice chairman Tony Perkins said the commissioners were “encouraged to see that the designation this year also reflects significant advancements in religious freedom in Uzbekistan and Sudan, which were both removed from the SWL.”

Although the USCIRF earlier this year had recommended that they stay on the special watchlist, he said, “it is undeniable the historic progress that has been made in these two countries. We hope that their progress encourages positive change in other places around the world.”

USCIRF’s annual recommendations for CPC and SWL designations typically differ from the actual decisions taken by the State Department. For instance, it has been recommending Nigeria’s blacklisting since 2009, but only now has an administration followed the advice.

In other differences between the USCIRF recommendations this year and the decisions announced by Pompeo, the commission had called for CPC listing for India, Russia, Syria, and Vietnam (in addition to the ten countries actually designated on Monday).

Meanwhile each of its four years has seen movement in the CPC designations.

In year one, Uzbekistan was designated a CPC, while 2018 saw Pakistan blacklisted – a reversal from 16 consecutive years of the Obama and Bush administrations declining to do so despite repeated USCIRF recommendations. In addition, Uzbekistan was upgraded from a CPC to a SWL country, joining Russia and Comoros on that list.

In its third year, the administration removed Sudan from the CPC list, upgrading it to a SWL country. It also added Cuba, Nicaragua, and Nigeria to the SWL, and kept Russia, Uzbekistan and Comoros on it.

And in its fourth year, the administration has now moved Nigeria onto the CPC list, while removing Sudan and Uzbekistan from the second-tier list.

By contrast, there were notably fewer changes to the CPC list under the Obama administration. (The SWL list did not then exist; the category was created under legislation designed to strengthen the IRFA, signed into law at the end of 2016.)

From 2007 until 2016, the same eight countries remained on the CPC list each year – Burma, China, Eritrea, Iran, North Korea, Saudi Arabia, Sudan and Uzbekistan. The only changes made during the eight years of the Obama administration was to add Turkmenistan to the list in 2014, and Tajikistan in 2016.