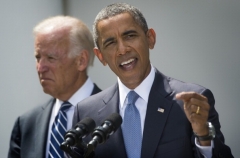 (CNSNews.com) – A majority of respondents in a new poll of the Arab world – 53 percent – believe the Obama-Biden administration left the Middle East worse off, and want the next American president to take a tough approach with Iran.

The view that President Obama left the region in a worse state in 2016 than eight years earlier was particularly strongly felt among Iraqis (69 percent), Syrians (67 percent), and Bahrainis (66 percent).

Just 26 percent of respondents in the 18 Arab countries surveyed by YouGov for the Saudi newspaper Arab News thought that the Obama presidency left the region better off.

At the same time, however, more respondents thought Joe Biden would be better for the Middle East than President Trump, by a margin of 40 points to 12 (although the largest cohort, 49 percent, said neither of the candidates would be “good for the Arab world.”)

And 58 percent of respondents think Biden should “distance himself from the Obama administration” if he becomes president, compared to 27 percent who thought he should associate himself with it.

Perhaps helping to explain the apparent contradiction, 47 percent of respondents said they had never heard of Biden, compared to just 10 percent who said they haven’t heard of Trump.

Also, Trump’s decision to move the U.S. Embassy from Tel Aviv to Jerusalem clearly resonated – negatively – for many in the region, with 88 percent saying it was not the right move and only 11 percent dissenting.

Thumbs up for Soleimani killing

But other Trump priorities in the region were far more popular, the poll suggests.

The decision to kill Qods Force commander Qassem Soleimani – in a drone strike in Baghdad last January – was viewed as “positive move for the region” by 71 percent of respondents in Syria, 71 percent in Yemen, and 57 percent in Iraq. The Iranian regime described Soleimani as a beloved hero in the region, but the poll numbers present a different picture, especially in the three countries most directly affected by Qods Force activities. 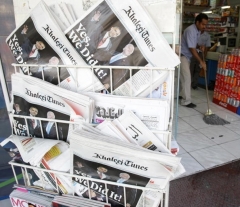 Headlines in newspapers in Dubai report on the Obama-Biden election victory in Nov. 2008. A new poll finds a majority of Arabs think their administration left the region worse off. (Photo by Karim Sahib/AFP via Getty Images)

Only 34 percent of the respondents in the 18 countries polled said the next U.S. president should revive the Joint Comprehensive Plan of Action (JCPOA) nuclear deal with Iran, from which Trump’s withdrew in 2018.

The rest were divided between “continue sanctions, lead war posture” (33 percent) towards the Iranian regime and “negotiate [a] toughened nuclear agreement” (33 percent).

Of note, the two countries accounting for the strongest support for a sanctions/war posture policy were among those most vulnerable to its adventurism – Iraq (53 percent) and Yemen (54 percent).

As for the top three issues they want the next U.S. president to focus on, respondents selected “empowering young people” (44 percent) and “solving the Arab-Israeli conflict” (44 percent), followed by containing coronavirus (37 percent).

Next on the list came “containing Iran and Hezbollah” (24 percent) and “quashing radical Islamic terrorism (24 percent). Just 17 percent wanted the next president to prioritize climate change.

Mulling some of the findings in the poll, Arab News editor-in-chief Faisal Abbas said the negative views of the Obama legacy marked “an interesting change in attitude; as I am sure we all remember just how popular President Obama was in the region following his famous 2009 Cairo speech.”

“However, it seems that we in the Middle East are finally learning the lesson that actions speak louder than words.”

Abbas argued that “blame for setting the region ablaze can be almost exclusively distributed among [former Secretary of State Hillary] Clinton, Obama and Ben Rhodes, the president’s ‘boy genius’ of a deputy national security adviser.”

Rhodes, a vocal social media critic of Trump, was especially closely associated with the JCPOA. He boasted in a New York Times Magazine article in 2016 about having “created an echo chamber” of experts and journalists, to sell the JCPOA” to the American people.

Syria and the ‘red line’

While the perception that the JCPOA empowered Iran at the expense of others in the region likely plays into Arabs’ negative views of the Obama era, so too was his response to chemical weapons use in Syria.

In August 2013, Bashar al-Assad’s regime was blamed for a sarin gas attack near Damascus that cost more than 1,400 lives. Obama, who a year earlier had declared that the use of chemical weapons in Syria would be a “red line for us,” signaled plans for punitive airstrikes.

Instead, it agreed to a Russia-brokered deal that saw Bashar al-Assad surrender all “declared” chemical weapons stocks.

The administration depicted the deal as a diplomatic coup, but since then the regime has been accused on several occasions of using chemical weapons – and when it did so in April 2017 and April 2018, Trump twice ordered limited cruise missile strikes on regime targets.

The YouGov poll does not mention the chemical weapons issue specifically, but it does find strong feeling among Syrian respondents about Obama’s policies, 67 percent of whom said they left the region worse off.

Then-Secretary of State John Kerry would later concede that the “red line” episode carried a cost for the U.S. in the region (although he argued that the cost was based on a misperception.)

Former CIA Director Gen. Michael Hayden said the incident had “cost [America] in so many ways,” while former Defense Secretary Robert Gates called it “one of the sad stories of the president’s foreign policy.”