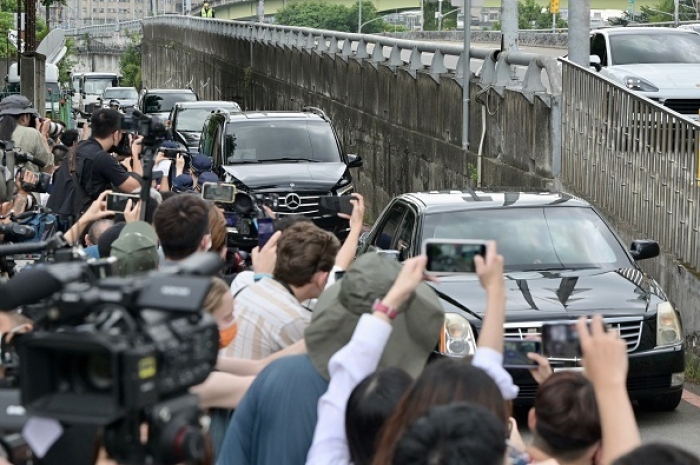 (CNSNews.com) – Speaker Nancy Pelosi said on Wednesday she hopes China understands that, while it might restrict Taiwan's participation in multilateral institutions, “they will not stand in the way of people coming to Taiwan as a show of friendship and support.”

Commenting during a press briefing in Taipei about China’s hostile reaction to her visit, Pelosi said that “not too much of a fuss was made” when a bipartisan delegation of senators, including Senate Foreign Relations Committee chairman Bob Menendez (D-N.J.), visited last April.

“I think they made a big fuss because I’m speaker, I guess.”

“I don’t know if that was a reason or an excuse – because they didn’t say anything when the men came,” she added with a laugh.

Pelosi’s position puts her second in the line of succession to the presidency. As such she is the most senior U.S. official to travel to Taiwan since 1997, when Republican Speaker Newt Gingrich visited.

Pelosi said she hoped that it was “really clear that, while China has stood in the way of Taiwan participating and going to certain meetings, that they understand they will not stand in the way of people coming to Taiwan as a show of friendship and support – and also a source of learning about how we can work together better, in collaboration.”

In her remarks after receiving the “Order of Propitious Clouds,” Pelosi said her delegation had traveled to Taiwan “to make unequivocally clear that we will not abandon our commitment to Taiwan, and we’re proud of our enduring friendship.”

“The story of Taiwan is an inspiration to all freedom-loving people – in the United States and around the world,” she said.

“Out of a crucible of challenge, you have forged a flourishing democracy: one of the freest in the world – proudly to be led by a woman president.”

Pelosi said the people of Taiwan had proven to the world that “with hope, courage and determination, it is possible to build a peaceful and prosperous future, even in terms of the challenges you face.”

“And now more than ever, America solidarity with Taiwan is crucial. And that is the message we are bringing here today.”

China views Taiwan as a breakaway province that it will eventually reincorporate into the mainland. Beijing works energetically to restrict its diplomatic space. It says visits like Pelosi’s are designed to encourage elements in Taiwan that want to declare formal independence.

Minutes after Pelosi’s plane landed on Tuesday night, China’s People’s Liberation Army announced a series of live-fire drills in the waters around the island, from Thursday to Sunday.

The Taiwanese defense ministry said the Chinese exercises were effectively a blockade, since the PLA has prohibited entry of vessels and aircraft in the sea and airspace where they are to take place.