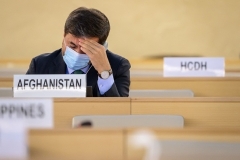 Afghanistan ambassador Nasir Ahmad Andisha, who was appointed by the government that was toppled by the Taliban in August, is still occupying the Afghanistan seat at the U.N. Human Rights Council in Geneva. (Photo by Fabrice Coffrini/AFP via Getty Images)

(CNSNews.com) – The U.N. Human Rights Council on Thursday adopted a resolution establishing a “special rapporteur” to monitor the human rights situation in Afghanistan over the next year, but not before China offered amendments designed both to water down the text and to point fingers at the United States.

Its passage, on the penultimate day of the HRC’s month-long session in Geneva, came six weeks after the council held a “special session” on the crisis in Afghanistan. It ended with a resolution that failed to set up any kind of monitoring mechanism – and did not even mention the Taliban.

The word “Taliban” does appear in Thursday’s resolution, three times. There are two references to violations of human rights being “committed by the Taliban and other parties to the conflict,” and a further reference to “neither the Taliban nor any other group or individual” supporting terrorists operating on the territory of any other country.

“The rights of women and girls are of particular concern to us,” the head of the E.U. delegation in Geneva, Lotte Knudsen, said after the resolution passed. “The actions of the Taliban directed against women and girls and the violation of their rights are highly worrying.”

“This is an essential step to ensure continued monitoring, through a dedicated and independent expert, and to help prevent a further deterioration of the human rights situation in Afghanistan.”

“We stand by the Afghan people,” he said. “We will assess the Taliban’s actions, not their words.

Before the council voted on the resolution, China proposed five separate amendments, each of which failed.

One of Beijing’s amendments called on “relevant States to reverse their decision to freeze Afghanistan Central Bank assets” – a clear reference to the United States.

Another unsuccessful Chinese proposal would have removed wording calling for “respect for the rule of law, freedom of expression, including for members of the media, with specific attention to human rights defenders.”

Where the original text called for the rapporteur to “report on the developing situation of human rights,” China sought to add the words, “including violations and abuses of international human rights law and international humanitarian law by all parties to the conflict in Afghanistan, including those perpetrated by foreign military forces.”

Another Chinese amendment would have inserted into a paragraph on the humanitarian situation the phrase, “urges the States that caused the current difficult situation in Afghanistan to take due responsibility in the reconstruction of the country.”

A final Chinese proposal would have removed the requirement for U.N. High Commissioner for Human Rights Michelle Bachelet to update and report back to the HRC on the situation in Afghanistan.

Each of China’s proposed amendments was voted down, with China, Russia, Eritrea, Pakistan, Bolivia, Uruguay, Indonesia, and the Maduro regime voting in favor of some or all of them.

Backing China’s amendments, Russia’s representative complained that the draft resolution “tries to blame [the current situation] on one particular side” although human rights violations have been occurring in Afghanistan over the past 20 years.

Khalil Hashmi, the representative of Pakistan, the Taliban’s closest historical ally, also expressed disappointment over the resolution, arguing that it stoked “divisions” where the earlier one – adopted at the “special session” in August – had reflected a consensus approach. (Pakistan on behalf of the Organization of Islamic Cooperation was the main driver behind the special session.)

Hashmi called the E.U.-drafted text “ill-timed, ill-advised and potentially counterproductive,” arguing that by taking a forward-looking approach it “nurtures a troubling notion at this council that violations and abuses have an expiry date and that powerful states and actors remain immune to accountability.”

The HRC vote on the resolution mandating a special rapporteur to monitor human rights in Afghanistan was as follows: