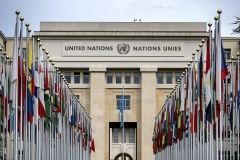 Flags of U.N. member-states line the front lawn of the U.N. headquarters in Geneva, home to the Human Rights Council. (Photo by Gabrice Coffrini/AFP via Getty Images)

(CNSNews.com) – Only five of the 18 countries standing for election onto the Human Rights Council on Thursday deserve to get seats on U.N.’s top human rights body, a Geneva-based non-governmental organization that closely monitors the council said on Wednesday.

In a report evaluating the 18 candidates, U.N. Watch singled out five candidates as particularly “unqualified” to sit on the HRC, both because of their own poor human rights records, and their voting records at the U.N.  The five are Cameroon, Eritrea, Kazakhstan, Qatar, and Somalia.

The U.N. Watch report, which was distributed to diplomats at the world body, listed a further eight candidates as having “questionable” credentials for membership on the council – Benin, Gambia, Honduras, India, Paraguay, Malaysia, Montenegro, and the United Arab Emirates.

The remaining five candidates, which U.N. Watch said were qualified to serve on the council, are Argentina, Finland, Lithuania, Luxembourg, and the United States.

The evaluations were based on the assessment of each country by Freedom House, Reporters Without Borders, and the Economist Democracy Index, together with each country’s record of voting at the U.N. on ten key human rights-related resolutions.

“Electing Qatar, Cameroon or Kazakhstan as a U.N. judge on human rights would be like making a pyromaniac into the town fire chief,” said U.N. Watch executive director Hillel Neuer.

The HRC’s 47 seats are occupied for three-year terms, and one-third of them come up for election each fall.

There are 18 seats to be filled by the U.N. General Assembly in a secret ballot vote on Thursday – and just 18 candidates for those seats.

That’s because the U.N.’s five regional groups have all submitted “closed slates” – the same number of candidates as there are vacancies for each group.

It is that absence of competition, which has become commonplace in the voting exercise for HRC seats, that has allowed some of the world’s most abusive regimes to secure places on the council.

The only time candidates have failed to win seats in the past has been when their regional group put up a competitive slate, such as when Russia lost a three-way contest for two vacant seats in its group in 2016.

Without competition, and with a low threshold to succeed – a simple majority of 97 votes in the 193-member General Assembly – Thursday’s voting exercise is not expected to offer any surprises.

Still, in the unlikely event that enough U.N. member-states opposed a particular candidate to deprive it of the required 97 votes, two more ballots would be held, and if the situation remained unchanged any eligible country would be able to step in and declare its candidacy.

“Sadly, all signs are that the U.N. will disregard its own rules and principles [on Thursday] by rubber-stamping the election of Cameroon, Eritrea, Kazakhstan, Qatar and Somalia – even though these regimes systematically violate the human rights of their own citizens and consistently frustrate U.N. initiatives to protect the human rights of others,” said Neuer.

The 18 countries ushered onto the council from the beginning of 2022 will join an existing membership that includes a number of countries with poor human rights records, including Russia, China, Cuba, Sudan, Gabon, Libya, Uzbekistan, Mauritania, Pakistan, and the Maduro regime in Venezuela.

In fact, the HRC next year will have the smallest number of free democracies in its ranks since the council was established in 2006: Just 15 members, or 31.9 percent of the total, will be ranked as “free” in Freedom House’s annual assessment of countries’ political rights and civil liberties.

The Biden administration, reversing its predecessor’s policy, this year re-engaged with the HRC and announced in February that it was standing for a seat on Thursday, “humbly” requesting the support of all U.N. member-states for its bid.

The Biden administration concedes the HRC’s flaws, but argues that engaging and being a member places the U.S. in a stronger position to encourage reforms.

“The U.S. has promised to work on reforming the council's membership, methods and agenda,” said Neuer. “This will be a tall order.”

The Bush, Obama, and Trump administrations all attempted to reform the council, with little success.