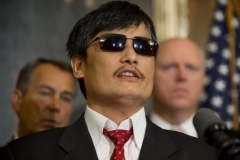 Chen Guangcheng speaks at a press conference at the U.S. Capitol in 2012, three months after arriving in the U.S. (Photo by Saul Loeb/AFP/GettyImages)

Viewers tuned to some of the television networks would have missed Chen’s speech to the Republican National Convention, however, as they chose to skip it.

Chen, blind since infancy, delivered his speech while reading Braille.

“When I spoke out against China’s ‘one child’ policy and other injustices, I was prosecuted, beaten, sent to prison, and put under house arrest by the Chinese Communist Party.”

Chen was imprisoned in 2006 and harassed for years after exposing hundreds of cases of forced sterilization and abortion by officials in Shandong province who were enforcing the CCP’s population-limitation quotas.

He was finally able to leave China for the U.S. in 2012, after fleeing house arrest and taking shelter at the U.S. Embassy in Beijing.

“I am forever grateful to the American people for welcoming me and my family to the United States where we are now free,” he said.

“The CCP is an enemy of humanity. It is terrorizing its own people and it is threatening the well-being of the world.”

Chen called on the U.S. to “gather a coalition of other democracies to stop the CCP’s aggression. President Trump has led on this and we need the other countries to join him in this fight. A fight for our future.”

“Standing up to fight unfairness isn’t easy,” he concluded. “I know. So does President Trump. But he has shown the courage to wage that fight.”

Just as the RNC program arrived at the point of Chen’s speech, PBS broke away from its live coverage, with NewsHour host Judy Woodruff turning to a panel of commentators: “We’ve got a few minutes, and I want to hear from our analysts before we hear from our next major speaker at the convention.”

PBS then skipped both Chen and Rep. Lee Zeldin (R-N.Y.), before returning to the convention about 40 seconds into a speech from the speaker following Zeldin, Sen. Joni Ernst (R-Iowa).

Like PBS, MSNBC cut away before Chen began to speak, for “a quick break” to discuss the previous speaker’s assertion that the media lies by falsely claiming that President Trump called white supremacists in Charlottesville “fine people.”

After the “fact check,” MSNBC returned to the convention as Zeldin began to speak.

CNN did not cover Chen’s speech, and neither did ABC News, which cut away directly before it, skipping both Chen and Zeldin before returning for Ernst.

Fox News, CBS News and C-SPAN did include Chen’s speech in their coverage. 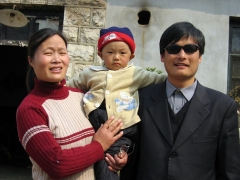 A picture dated March 2005 shows Chen Guangcheng with his wife and son outside their home in Shandong province. (Photo by STR/AFP via Getty Images)

‘He shamed them before the world’

Women’s Rights Without Frontiers president Reggie Littlejohn, who campaigned for Chen during his imprisonment and is a close friend, said Wednesday she would never in her “wildest dreams” have imagined that he would one day be addressing the nation at the RNC.

“Guangcheng is thoroughly despised by the Chinese Communist Party, because he shamed them before the world by exposing their late-term forced abortion practices,” she said.

“Having Guangcheng speak at the RNC sends a bold message to China: The U.S. will no longer put up with China’s egregious human rights atrocities, but will hold accountable those responsible.”

Chen was still under house arrest in China when in mid-2011, Vice President Joe Biden told a Chinese audience while visiting Chengdu, “Your policy has been one which I fully understand – I’m not second-guessing – of one child per family.”

He made no reference to coercion and abuses, saying only that the policy was “not sustainable” economically.

After sharp criticism at home, Biden’s office said in a statement, “The Obama administration strongly opposes all aspects of China’s coercive birth limitation policies, including forced abortion and sterilization. The vice president believes such practices are repugnant.”

In testimony during a Congressional-Executive Commission on China hearing four months later, Littlejohn said Biden’s “not second-guessing” remark had “really undermined the moral credibility of the United States on the world international scene.”