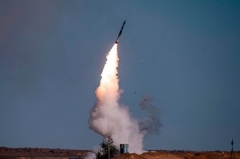 A rocket is launched from a Russian S-400 air defense system in southern Russian during military exercises in September 2020. (Photo by Dimitar Dilkoff/AFP via Getty Images)

(CNSNews.com) – NATO Secretary-General Jens Stoltenberg urged Turkey on Monday to find “alternative solutions” to its deployment of an advanced Russian missile defense system, noting that the controversially acquired S-400s “can pose a risk to allied aircraft and can lead to U.S. sanctions.”

Speaking during a visit to Ankara, Stoltenberg said the S-400 dispute was one of “a number of difficult issues” the transatlantic alliance wants to resolve with its member Turkey.

“I urge Turkey to work with other allies to find alternative solutions.”

President Recep Tayyip Erdogan’s defiance of NATO over the Russian equipment prompted President Trump in July 2019 – when the S-400s began to arrive in Turkey in July last year – to end Turkey’s participation in the F-35 joint strike fighter program. Turkey has to date not been targeted with U.S. sanctions over the purchase.

The S-400s are not yet known to have been activated, but Stoltenberg’s visit to Turkey coincided with two reports suggesting that that may either no long be the case – or could be about to change.

The Turkish Minute news site reported at the weekend that, according to an official Turkish document it has seen, Turkey is planning to test the S-400 system in Sinop, a province on the Black Sea north-east of Ankara, in the coming days, using Banshee target drones.

Then on Monday, the Greek newspaper Ekathimerini reported that Turkey may have activated the S-400 to detect Greek F-16 fighters during an exercise off Cyprus in late August. (Greece, Cyprus and Turkey are locked in a tense dispute over drilling for energy resources in the eastern Mediterranean. Greece and Turkey are both NATO allies.)

Ekathimerini reported that U.S. concern over that alleged use of the S-400 had prompted subsequent visits to Cyprus and Greece by Secretary of State Mike Pompeo. It said Pompeo’s “visits highlight how Ankara’s procurement of the S-400s is irking Washington, which has threatened to impose sanctions if the Russian system is activated.”

“This should be a game changer if confirmed,” said Jonathan Schanzer, senior vice president for research at the Foundation for Defense of Democracies, in reaction to the Greek news report. 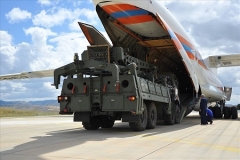 “This has always been a serious concern – that Turkey would use the S400 against U.S. or NATO allies. The other concern being that if connected to other NATO systems, the S400 could pose a major interoperability (cyber) threat,” he tweeted.

“And I am hearing from Greek friends that the Turks may have done just that: connected S400 to NATO radar systems,” Schanzer said. “If all of this can be confirmed by a U.S. official, a swift response will be necessary. Nothing less than Turkey’s NATO membership should be at stake.”

Speaking alongside Stoltenberg on Monday, Turkish Foreign Minister Mevlut Cavusoglu – not for the first time – pointed a finger at the U.S. for not selling Turkey Patriot air defense systems, claiming that had left Ankara with little choice but to turn to Russia.

“Because we cannot buy Patriots or any other air defense systems from our allies, we had to buy S-400,” he said.

Cavusoglu acknowledged that the decision to buy the $2.5 billion Russian system has created “sensitivity” within NATO, but said other NATO allies need to understand that Turkey also needs to meet its essential defense requirements, and not “cause each other difficulties.”

In fact, the U.S. offered to sell Patriots to Turkey almost two years ago – in a bid to defuse the row over the S-400s. Turkey has not taken up the offer.

The S-400 is a surface-to air-missile system capable of targeting aircraft, drones, and missiles within a range of 250 miles and an altitude of up to 18 miles.

Turkey’s signing in September 2017 of a deal to buy the system evidently violated a NATO decision, reaffirmed at a summit in Warsaw the previous year, suspending all military cooperation with Moscow and agreeing to “address, as appropriate, existing dependencies on Russian-sourced legacy military equipment.”

Beyond its removal from the F-35 program, Ankara could face U.S. sanctions, under section 231 of the 2017 Countering America's Adversaries Through Sanctions Act (CAATSA), which targets “significant” financial transactions with Russia’s military sector.

Last July, U.S. lawmakers introduced a bill specifically defining the S-400 sale to Turkey as a “significant” transaction, thus making it eligible for CAATSA sanctions, and setting a 30 deadline from passage of the legislation for such sanctions to be imposed.

A senior State Department official said late last year Erdogan must “either destroy, return, or somehow get rid of the S-400” systems, if it is to avoid further consequences from the U.S.