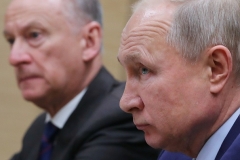 (CNSNews.com) – White House National Security Advisor Robert O’Brien said on Sunday that he met with his Russian counterpart late last week, and secured a pledge that Moscow will not interfere in the U.S. election.

O’Brien said on CBS’s “Face the Nation” that one of the reasons he met with Russian Security Council secretary Gen. Nikolai Patrushev in Geneva was “to let him know that there would be absolutely no tolerance for any interference with our Election Day, with our voting, with the vote tallies.”

He said he had “demanded that – that Russia not engage in that sort of thing.”

“The Russians have committed to doing so,” O’Brien continued, then immediately added a note of caution.

“And so, you know, look, it’s Russia,” he pointed out. “So, as President Reagan said – and as President Trump often says – it’s ‘trust but verify.’ So we’ll keep an eye on it, but the Russians did commit to not interfere in the elections.”

“We’ll see what happens,” he said, adding that “that was a message that the president thought it was important that I go deliver in person to General Patrushev, who’s – who, as you know, is President Putin’s right-hand person.”

O’Brien also said that he had spoken to Trump from Geneva on Friday, “to give him an update on the talks.”

Russian Security Council spokesman Yevgeny Anoshin earlier confirmed the talks – the first face-to-face meeting between O’Brien and Patrushev – describing them as “a bid to normalize bilateral relations and strengthen the international security.”

The TASS state news agency quoted Anoshin as saying that “both sides confirmed the absence of intention to meddle in each other’s internal affairs, including in the electoral process in Russia and the U.S.”

O’Brien tweeted on Friday that other issues discussed in Geneva included arms control, cybersecurity, counterterrorism, the conflict between Armenia and Azerbaijan, and the situations in Syria and Afghanistan.

“We had business-like and constructive dialogue and, while we have differences, I am optimistic that the United States and Russia can make progress in key areas that will ultimately benefit both the American and Russian people.”

During Sunday’s interview host Margaret Brennan asked O’Brien whether there was any intelligence to suggest that the Russians and others were “using the president’s [COVID-19] diagnosis as any kind of campaign against the United States.”

“No, look, I think our adversaries know that – that the United States government is steady at the – at the tiller and that we’re – we’re protecting the American people.”

Brennan also asked earlier whether the White House national security team had “discussed a scenario in which at some point the president might have to transfer power if he can no longer discharge the powers and duties of his office.”

“That’s not something that’s on the table at this point,” he replied, in reference to a transfer of power to Vice President Mike Pence. O’Brien said that Trump – who has been at Walter Reed Medical Center in in Bethesda, Maryland since Friday evening, after he and First Lady Melania Trump tested positive for the coronavirus – is “doing very well.”

Brennan pointed to those incidents, but O’Brien noted that in those cases the presidents had gone under general anesthetic and so “weren’t available at that time.”

“I think we’re in a different situation here,” he said. “And so far the president’s in great shape. He’s firmly in command of the government of the country.”