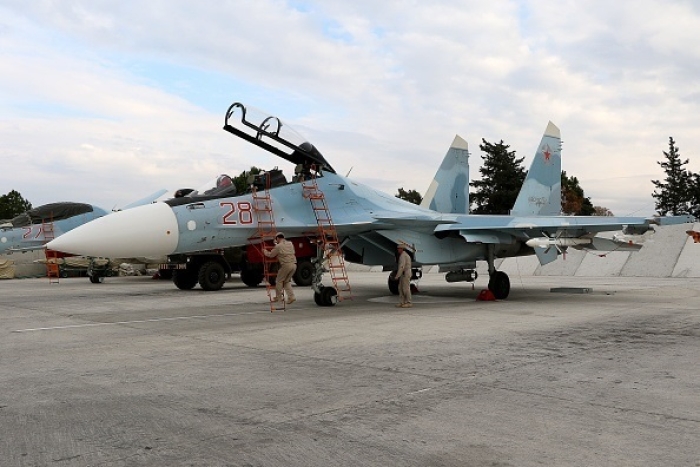 Russian Sukhoi Su-30M fighters, like those photographed here, are among the aircraft based at the Saki air base in Russian-occupied Crimea, the location of a series of dramatic explosions earlier this week. (Photo by Paul Gypteau / AFP via Getty Images)

(CNSNews.com) – A day after a series of huge explosions and billowing smoke were seen at a Russian air base in Crimea, satellite imagery revealed signs of significant damage, including what appeared to be destroyed fighter jets on the apron and in protective revetments.

Several aircraft and at least two fairly sizeable structures at the Saki air base on the Russian-occupied Ukrainian peninsula appeared to have sustained extensive damage, in the images from U.S.-based satellite operator Planet Labs.

Ukrainian President Volodymyr Zelenskyy, in his nightly address to the nation, put the number at nine.

“In just one day, the occupiers lost ten combat aircraft: nine in Crimea and one more in the direction of Zaporizhzhia,” he said, without elaborating.

“Russians call Ukrainian Crimea an ‘unsinkable aircraft carrier,” commented the Ukrainian defense ministry on its social media platforms. “The ‘carrier’ that enjoys a smoke is now left without its favorite planes. 9 fewer as of yesterday.”

The Ukrainian Air Force on its Facebook page referred to the loss of “nine invader planes,” although in a subsequent posting it included one of the satellite images and said the actual number of aircraft destroyed in the “emergency situation” appeared to have been higher than that.

The Russian defense ministry claimed earlier that Tuesday’s huge blasts, which had killed one person, had been caused by the detonation of munitions stored at the base, in a fire attributed to “a violation of fire safety rules.” It also asserted that no aircraft had been damaged.

Crimea, which the Kremlin annexed in 2014 and considers part of the Russian Federation, has remained free of fighting since the invasion began in February – until now. Russian officials have warned that any attack on the strategic peninsula would attract massive retaliation.

The Saki air base is located around 120 miles from the nearest Ukrainian-held territory.

In the absence of formal confirmation of Ukrainian involvement in the incident, speculation has been that the explosions could either have been the result of a long-range missile strike – although video clips of the explosions show no visible sign of incoming projectiles – or the work of Ukrainian saboteurs on the ground.

The Institute for the Study of War, which provides regular updates on Russia’s offensive campaign, said it could not independently assess what caused the explosions, noting that the damage revealed in the satellite imagery “could have been caused by many things – special forces, partisans, or missiles, on-site or from a distance.”

Of the fact Russia has not publicly accused Ukraine of responsibility, the institute said the Kremlin had little incentive to do so, “since such strikes would demonstrate the ineffectiveness of Russian air defense systems, which the Ukrainian sinking of the Moskva had already revealed.”

British Defense Secretary Ben Wallace said the U.K. government was still looking into what happened at the air base. But he told the BCC it was “absolutely legitimate” for Ukrainian forces to use lethal force “to regain not only its territory, but also to push back its invader.”

On Twitter, Ukrainian presidential advisor Mykhailo Podoliak, without commenting on the explosions themselves, also defended the right to target Russian forces in Crimea.

“Legally, Donetsk and Crimea have the same status as Mariupol or Melitopol,” he said. “[Ukrainian] territories occupied by [Russia], which [are] subject to liberation.”