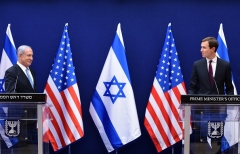 (CNSNews.com) – President Trump on Thursday announced a fourth Arab-Israeli normalization agreement in as many months, as Morocco agreed to recognize the Jewish state. In return he issued a proclamation recognizing Morocco’s longstanding claim to sovereignty over a sparsely-populated disputed territory in north-western Africa – an attempt to break a decades-long stalemate.

“Another HISTORIC breakthrough today!” the president tweeted. “Our two GREAT friends Israel and the Kingdom of Morocco have agreed to full diplomatic relations – a massive breakthrough for peace in the Middle East!”

According to the White House, Morocco and Israel will restore diplomatic relations and expand economic and cultural cooperation, launch direct flights and grant overflight rights, and immediately reopen liaison offices in Rabat and Tel Aviv, followed “in the near future” by embassies.

As part of the agreement, the U.S. has agreed for the first time to back Morocco’s claims in the Western Sahara.

The dealmaking is characteristic of the Trump administration’s norm-breaking approach to the region: Sideline for now the Palestinian issue, and encourage Arab and Muslim states to normalize relations with Israel, offering concessions from the U.S. as an incentive.

In October the administration tied Sudan’s recognition of Israel with Khartoum’s removal from the U.S. list of state-sponsors of terror, along with settlement of a dispute over Sudanese compensation to U.S. terrorism victims. The terror delisting enabled the nation that ejected the Omar al-Bashir Islamist dictatorship in 2019 to rejoin the global financial system and be eligible for loans from international lenders.

Earlier, the administration brokered an economic normalization agreement between warring Balkan neighbors Kosovo and Serbia, in return for Muslim-majority Kosovo agreeing to recognize Israel, and Serbia’s agreement to move its embassy to Israel from Tel Aviv to Jerusalem.

And the first two of the four Arab-Israeli normalization agreements concluded since August, with the United Arab Emirates and Bahrain, carry significant economic, trade, and tourism benefits. As an additional achievement, the Gulf states could also point to an agreement by Israel to suspend controversial plans to extend sovereignty over some of the territories disputed between Israel and the Palestinians.

White House senior advisor Jared Kushner, who along with negotiator Avi Berkowitz led the negotiations on the latest deal, said at a briefing progress in the region “has been held back for so long by old thinking and by stalled process, and we finally had a breakthrough four months ago, and we’re continuing to push the region forward.”

“The more people can have interaction with each other, the less the extremists and the jihadists have to justify the terrible things they do in the name and the perversion of the Islamic faith,” he said. 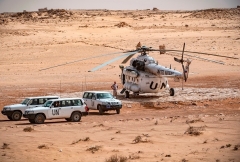 Kushner described the Western Sahara part of the deal as a bid to “break the logjam.”

“This is something that’s been talked about for a long time but something that seemed inevitable at this point, and something that we think advances the region and helps bring more clarity to where things are going.”

Morocco controls about three-quarters of Western Sahara, which is roughly the size of Colorado, after seizing territory when former colonial power Spain withdrew in 1976. No country up until now has recognized its sovereignty.

The Polisario Front formed a Sahrawi government-in-exile, based in Algeria, campaigning for independence for the territory. A U.N. mission was established almost three decades ago to monitor a ceasefire and arrange a referendum that has yet to materialize.

Morocco has proposed political autonomy for Western Sahara under Moroccan sovereignty, a stance now formally backed by the U.S. for the first time.

“The United States believes that an independent Sahrawi State is not a realistic option for resolving the conflict and that genuine autonomy under Moroccan sovereignty is the only feasible solution.”

Urging the parties to enter discussions without delay, the document also said the U.S. will encourage “economic and social development with Morocco, including in the Western Sahara territory,” and open a consulate in Dakhla, the small coastal city that operates as the territory’s capital. 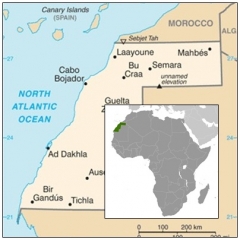 Kushner described Trump’s approach to the Mideast as “contrarian,” different to those followed in the past by Democratic and Republican administrations alike.

“We’ve been pursuing America’s interests in the region, which is counter-extremism, counter-terror, reduce the U.S. footprint in the region, create more of a security infrastructure there so that there’s less need for American troops and less conflict, that can promote economic opportunity and give people the opportunity to thrive in life, so that they can get out of these old conflicts that unfortunately have held people back.”

Morocco’s human rights record in Western Sahara has been widely condemned. The territory is the seventh lowest-scoring country or territory in Freedom House’s annual assessment of civil liberties and political freedoms, just one place above North Korea. (The very bottom five are South Sudan, Syria, Tibet, Turkmenistan, and Eritrea.)

When a reporter noted that the Arab countries doing deals with Israel have poor rights records, Kushner did not dispute that.

“Obviously, we don’t share the same values with all these countries; some countries we do more than others,” he said. “But in areas where we have disagreements, having a good relationship has enabled us to push for greater progress on some of these issues.”

“Part of being in political service is you don’t necessarily get to choose who you’re – you know, who leads these different countries,” Kushner said. “But we obviously respect the sovereignty of different places, and we work with the leadership to, again, advance America’s interests wherever we can.  And I think that we’ve been able to do this.”