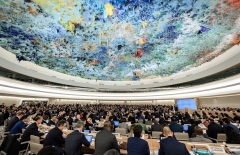 Delegates attend the opening of the U.N. Human Rights Council in Geneva. (Photo by Fabrice Coffrini/AFP via Getty Images)

(CNSNews.com) – The U.N. Human Rights Council is planning to hold an emergency meeting next week on “the grave human rights situation in the Occupied Palestinian Territory.”

It will be the ninth “special session” – out of a total of 30 – to target Israel in the council’s 15-year history.

Almost three years after the Trump administration withdrew from the HRC, its successor has re-engaged and will be seeking a seat on the Geneva-based body later this year.

News of the planned special session comes on the day Israel and the Hamas agreed on a ceasefire, ending an 11-day conflict sparked when the Gaza-based terrorist group fired a barrage of rockets towards Jerusalem on May 10.

The meeting scheduled for next Thursday was requested by Pakistan on behalf of the Organization of Islamic Cooperation (OIC), and has received the support of more than the required one-third of the HRC’s membership

Of the 29 special sessions – urgent meetings called to discuss the world’s most pressing human rights crises – held so far by the HRC since its establishment in 2006, eight focused on just one of the 192 U.N. member states – Israel; next week’s will be the ninth.

Of the remainder, the Syrian civil war accounted for five special sessions and abuses in Burma for three. Others (one each) have dealt with situations of concern in several African countries, Sri Lanka, or issues like terrorism, the financial crisis, and the Haiti earthquake.

Glaringly, no special session has been called to discuss the Chinese state’s mass incarceration of and maltreatment of minority Uyghurs in Xinjiang – atrocities which the United States and some others have determined constitute crimes against humanity and genocide.

On the contrary, China’s allies at the HRC have several times in the past three years put their names to joint statements praising Beijing’s policies in Xinjiang. OIC members have been prominent among the signatories. The most recent such intervention at the HRC took place just two months ago.

In order for the HRC to hold a special session, one-third of its membership – at least 16 of its 47 members – must support the request.

Pakistan’s request for next week’s meeting has already attracted the support of 20 HRC members – most of them rights-abusing autocracies.

“The convening of yet another special session by the Human Rights Council targeting Israel is testament to the clear anti-Israeli agenda of this body,” she said. “The sponsors of this session are only rewarding the actions of Hamas, a terrorist organization, that has indiscriminately launched over 4,000 rockets at Israeli civilians, using the people of Gaza as human shields.”

“Comprised 60% of tyrannies, the council will condemn Israel & exonerate Hamas,” he tweeted.

The most recent two HRC special sessions focusing on Israel, in May 2018 and July 2014, both adopted resolutions strongly critical of Israel. Both set up commissions of inquiry to investigate.

The 2018 meeting was called after clashes on the Israel-Gaza border erupted when thousands of Palestinians stormed the security fence as part of a Hamas-instigated protest campaign. More than 60 people were killed, most of them Hamas members.

The resolution adopted at that special session accused Israel of “disproportionate and indiscriminate use of force.” Hamas was not mentioned. The only “no” votes came from the U.S. and Australia. (The Trump administration withdrew from the HRC the following month.)

The July 2014 HRC special session was held after a month-long Israeli military offensive against Hamas, triggered by Hamas’ kidnapping and murder of three Israeli teenagers in the West Bank, and the firing of rockets from Gaza.

That meeting ended with the adopting of a resolution condemning Israel, but again not mentioning Hamas by name. On that occasion, the U.S. accounted for the only “no” vote.