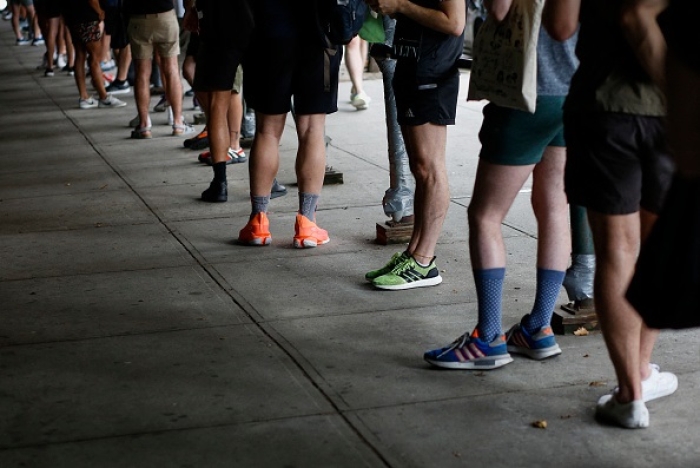 Men wait in line to receive the monkeypox vaccine in New York City on July 17. (Photo by Kena Betancur / AFP via Getty Images)

(CNSNews.com) – As he declared monkeypox to be a “public health emergency of international concern,” World Health Organization (WHO) director-general Tedros Adhanom Ghebreyesus noted on Saturday that the viral disease, now recorded in more than 70 countries, is currently “concentrated among men who have sex with men, especially those with multiple sexual partners.”

“That means that this is an outbreak that can be stopped with the right strategies in the right groups,” Tedros said during a briefing in Geneva.

“It’s therefore essential that all countries work closely with communities of men who have sex with men, to design and deliver effective information and services, and to adopt measures that protect the health, human rights and dignity of affected communities.”

He did not spell out the necessary “measures,” but instead went on to warn that “stigma and discrimination can be as dangerous as any virus.”

Data collated by the U.K. Health Security Agency show not only that most of those infected in that country are men who have sex with men, but that in almost one-third of cases multiple sexual partners have also been recorded.

In 31 percent of the cases for which information was known, the individuals concerned reported having had “10 or more sexual partners in the last 3 months.”

A study in the New England Journal of Medicine, covering 528 monkeypox infections in 16 countries between April and June, found that 98 percent of those infected were “gay or bisexual men.”

There have, however, been rare cases reported in women and children – including two young children and eight women in the U.S., according to the Centers for Disease Control and Prevention (CDC). The first case of monkeypox in the U.S. was confirmed on May 18.

Unlike COVID-19, monkeypox is not a new disease; it was first been identified in research monkeys in 1958, and in humans in 1970.

The virus has appeared for years in some western and central African countries, where it is endemic in animals and human-to-human spread is usually relatively rare.

But since May the current outbreak has spread to dozens of countries. There are now more than 16,800 cases worldwide, with Europe and North America accounting for the largest numbers.

According to Tedros, only five deaths have been recorded, all in Africa.

Existing vaccines that were designed for smallpox are considered to be effective in preventing or reducing the severity of monkeypox, which causes lesions that can be painful. The vaccine is known as Jynneos in the U.S., Imvamune in Canada, and Imvanex in Europe.

“There are multiple modes of transmission for monkeypox, including skin-to-skin contact, kissing or touching infected materials like bed linen,” said WHO advisor Andy Seale in a recent WHO science brief.

“What we know and what the evidence tells us is that sexual networks within communities of gay, bisexual and other men who have sex with men have played a role in transmitting the virus in the context of this outbreak,” he said.

“So some gay and bisexual men are connected to these dynamic sexual networks that connect cities and countries. And in the early days of the outbreak, international travel seemed to play a significant role in further amplification of this outbreak.” 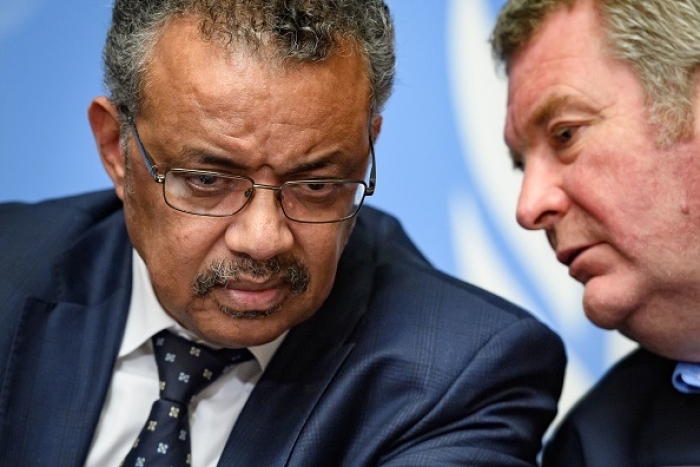 WHO director-general Tedros Adhanom and head of the WHO emergencies program Michael Ryan. (Photo by Fabrice Coffrini/AFP via Getty Images)

At the WHO press briefing, WHO executive director for health emergencies Michael Ryan said it was important to strike the right balance between taking the necessary public health measures and not discriminating against the community most affected.

He said the intensification of surveillance and control measures arising from the “public health emergency of international concern” decision should not be used for “coercive surveillance, or for the imposition of measures that would impede the dignity and human rights of the people affected.”

Despite the “GBMSM” factor, monkeypox is not a currently classified as a sexually-transmitted disease.

Asked why the virus is mostly affecting “men who have sex with men,” the WHO’s lead expert on monkeypox, Dr. Rosamund Lewis, said the as-yet unproven hypothesis was that, as people began to travel again after COVID-19, monkeypox “established itself in a group that have frequent social gatherings, are together often, and also have frequent events involving intimate physical contact and sexual contact, and sometimes sexual contact with multiple partners over a period of a few days or a few weeks.”

“This is a situation where there is, obviously, more skin-to-skin, person-to-person contact, close-contact situations – settings where there may be many people involved in certain activities.”