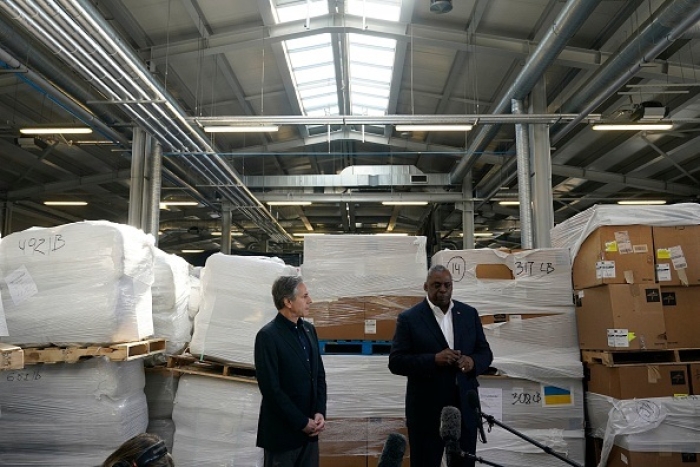 Defense Secretary Gen. Lloyd Austin and Secretary of State Antony Blinken speak to reporters in April in front of pallets of aid destined for Ukraine, in Poland near the border with Ukraine. (Photo by Alex Brandon / Pool / AFP via Getty Images)

(CNSNews.com) – Republicans in line to become chairs of two key committees in a GOP-led House said on Sunday future military aid to Ukraine needs to be subject to greater oversight. One expressed frustration about big price tag “Democrat bills” that include some spending not directly related to supporting Ukraine.

In an appearance on ABC’s “This Week,” Reps. Michael McCaul (R-Texas) and Mike Turner (R-Ohio), ranking members of the Foreign Affairs and Intelligence committees respectively, both made clear they back ongoing support for Ukraine’s defense against the Russian invasion.

Turner said he had traveled to Kyiv recently as part of a bipartisan delegation “for the sole purposes of telling President [Volodymyr] Zelenskyy that he does have continued support, and he will have bipartisan support.”

But he drew attention to GOP dissatisfaction with the way some of the Ukraine aid bills have been structured.

“The issue, obviously, is this: We don’t need to pass $40 billion large Democrat bills that have been – being passed, to send $8 billion to Ukraine,” he said. “And it’s been very frustrating, obviously, even to the Ukrainians where they hear these large numbers in the United States as a result of the, you know, burgeoned Democrat bills, and the little amount of aid that they receive.”

Turner pushed back at suggestions the Republicans will make it more difficult for the White House to secure more aid for Ukraine.

“It’s not an issue of difficulty,” he said. “It’s an issue actually just of – of accountability.”

Turner and McCaul both spoke of the need to provide the Ukrainians with equipment they have been calling for, so far to no avail – better air defenses to deal with the massive Russian assault on Ukraine’s infrastructure, and longer-range artillery to use in the precision-guided rocket HIMARS systems that the U.S. has supplied.

“For some reason, they will not put those weapons into Ukraine,” McCaul said of the ATACMs – the longer-range Army Tactical Missile Systems able to be used with the HIMARS platforms.

“We give them what they need, they win,” McCaul argued. “If we don’t, it’s going to be a long, protracted war.”

President Biden has said the U.S. will provide only short-range projectiles to use with the HIMARS platforms because he does not want the Ukrainians to start bombing Russian territory, and so risk further escalation.

Asked about House Republican Leader Kevin McCarthy’s warning last month about a GOP-led House not writing a “blank check to Ukraine,” and about opposition to Ukraine aid aired by some conservative members, McCaul said he believes “majorities on both sides of the aisle support this effort,” but also acknowledged that “everybody has a voice in Congress.”

“We are going to provide more oversight, transparency, and accountability,” he stressed. “We’re not going to write a blank check.”

He said a $40 billion package passed earlier this year had been unveiled to lawmakers on the day of the vote – “and members only had a matter of hours to go through all these pages of – of $40 billion supplemental.”

(While the bulk of the $40 billion in that bill was devoted to helping Ukraine, $8.7 billion went to replenishing stocks of U.S. equipment that had been sent to Ukraine, $3.9 billion was earmarked for U.S. European Command operations, and $5 billion was directed at addressing food insecurity globally, arising from the Russian invasion. Fifty-seven Republicans in the House, and 11 in the Senate, opposed the measure.)

“The Republicans are not going to rule like that,” McCaul said. “We have a voice, now, and we’re going to do this in an accountable way, with transparency to the American people. These are American taxpayer dollars going in.”

“Does that diminish our will to help the Ukraine people fight? No,” he said. “But we’re going to do it in a responsible way.” 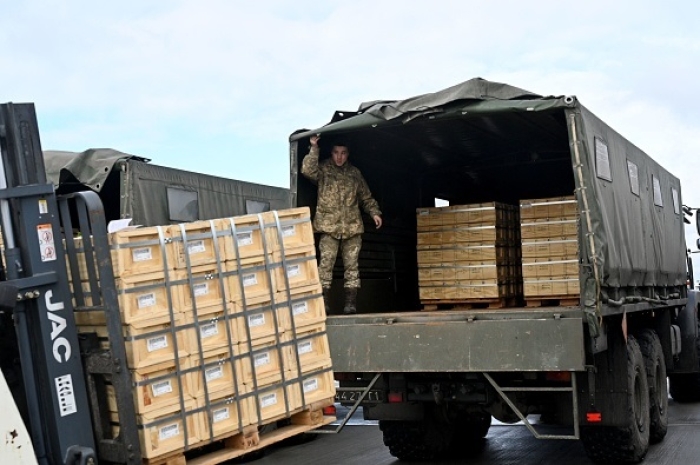 McCaul sought to place the conflict in a broader context, contending that failure in Ukraine would have negative impacts elsewhere in the world.

“I think it’s very important that the American people understand what’s at stake here. If we lose in Ukraine, Chairman Xi’s going to look at Taiwan,” he said of Chinese Communist Party leader and Chinese President Xi Jinping.

He also pointed out that two regimes hostile to the U.S., Iran and North Korea, are both supporting the Russian campaign in Ukraine.

“The ayatollah [Iranian supreme leader Ayatollah Ali Khamenei] is already all-in with Russia and China in this fight,” McCaul said. “And Kim Jong Un now is providing artillery shells to – to Russia to fight the Ukrainians.”